[dropcap]O[/dropcap]ccupy Baltimore is an extension of the grass roots movement of ‘Occupy Wall Street’.  Nestled in a park in Baltimore’s Inner Harbor and in the shadow of the financial district, members have set up tents and a makeshift headquarters that has stirred controversy since their arrival at the beginning of October.  When I arrived for an interview nearly three weeks after their occupation of this park, it seemed as though I had gone back to the days of the hippie protests of the late 60’s.  Tents were all around, protest signage was covering the ground and people were standing at the street corner shouting protests.  The closer I looked and spoke with some of these individuals, I found that this was a quite a mix of backgrounds and a wide range of ages. 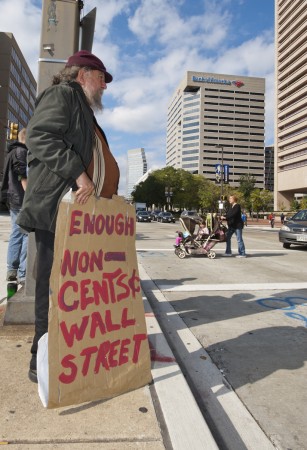 found that there were homeless mixed in with the young people who were upset over society and corporations, there were office workers, and of course, there were some just hanging around to observe the spectacle.  The homeless were attracted to having a place for shelter, restrooms, food and chance to be part of the movement.  One individual I interviewed said [quote]I was homeless, I stole, I did drugs and now I have a place to come and I have been clean for several weeks.  I now have a purpose in life.[/quote]   Although I could not find a leader for the group, everyone seemed motivated to be part of the movement in some way – performing music, making signs, protesting, passing out literature, serving food or doing whatever was needed.

Time, however, is running out for this group – a request for a permit has been denied by the City of Baltimore who wants ‘Occupy Baltimore’ to scale back their presence before they take action to remove them.  Until now this has been a peaceful demonstration and one without police presence.  In the wake of the Oakland California clashes, the residents of Baltimore are concerned that this tension may spark similar violence that would spread from this confined area.  Added to this, Mother Nature will now add her touch with harsh weather predicted.  It is now become a waiting game.