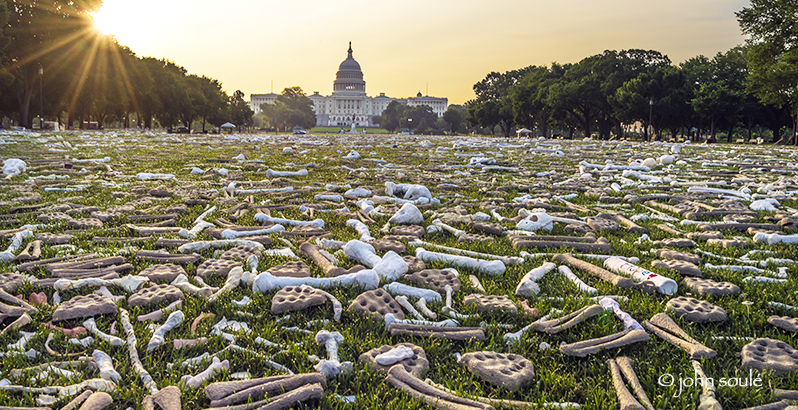 As the sun rose over the Nation’s Capitol on the morning of June 9, 2013, the National Mall appeared to be the site of a mass grave. Over one million bones had been scattered throughout the grass between the Capitol and Washington Monument (which is still under renovation).  The eerie scene looked like something out of a Tim Burton horror movie – the shock factor of seeing one million bones in the shadow of the National Capitol was certainly there.

One Million Bones is actually a project of The Art of Revolution – a large-scale social arts practice, combining education, hands-on art making, and public installations to raise awareness of ongoing genocides and mass atrocities in places like Sudan, South Sudan, the Democratic Republic of the Congo, Somalia and Burma. 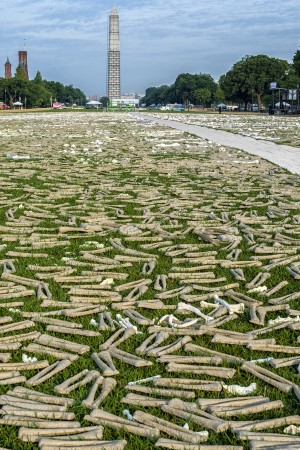 The concept of the massive art installation came from Albuquerque-based artist Naomi Natale.

Since 2010 she had been soliciting the contribution of artisan-made bones as a way of calling attention to genocide and mass killing throughout the world.

Natale was inspired by Phillip Gourevitch’s book on the Rwandan genocide and upon reading his descriptions of what had transpired there, decided to make the images real for those living in the United States. 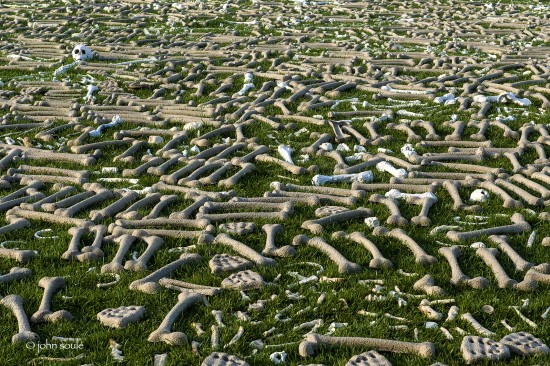 This event was the largest display yet from Natale, and became the culmination her project.

Natale hopes to find a permanent site to house this massive and moving collection.

The symbolic bones were to serve several purposes including honoring victims and survivors.  In a statement from the OneMillionBones organization, the bones were also ment to “serve as a visual petition against ongoing conflicts and call for much needed and long overdue action”.  Scenes like this are to shock, educate and then bring awareness to the public for action.

The bones had been hand-crafted by volunteers for the project out of clay, plaster, wood, glass, metal, paper and other materials.

Tens of thousands had been made in the Washington DC area alone.

The weekend event featured international speakers and performers, educational workshops and a candlelight vigil. Everyone was also invited to join the Act Against Atrocities led by the Enough Project.

In an advocacy video for the project, Desmond Tutu  addressed the significance of the bones.

“The symbol of the bone attests to the impermanence of life,” he said. “But I believe they embody so much more. Bones are evidence of a unique individual journey — each moment of hope and happiness, each dream and passion, each struggle experienced in a lifetime. But also the evidence of a collective journey, the stories shared and the human experience.”

Tutu also pointed out that the grave served as a reminder of those whose stories have been lost in places such as Sudan, Germany and the former Yugoslavia and reminded people of the collective responsibility to be one another’s keeper.  He further stated:

“Each individual’s humanity is inextricably linked to one another’s. We must raise each other up or else we all sink down.”

For more information on the project and additional references, please visit OneMillionBones.org.

The last two images are courtesy of OneMillionBones.org