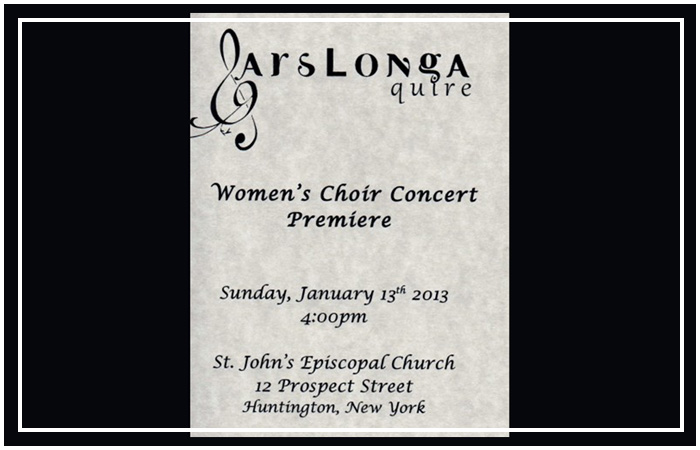 [dropcap]T[/dropcap]he premiere concert of the Ars Longa Quire at St. John’s Episcopal Church in Huntington, Long Island, NY, at 4:00 p.m. on Sunday afternoon, January 13th, 2013, was a beautifully presented and performed program of uniquely combined choral selections. At once in contrast to and complementary of one another, the vocal works included revealed the individual expertise of each singer as well as a subtly refined precision of vocal blending and tonal quality unity. At times, the lilting swell of the glorious choral mix rose to fill the sanctuary, reverberating from the distant architectural heights of the arched English Gothic style ceiling above. Whenever called for by the music, however, the choir members joined to produce a concise, singular note in perfect unison and expertly achieved sotto voce.

[box_light]Founders and Members of the Ars Longa Quire[/box_light]
First founded in the autumn of 2012 for professional singers by Professor Elise Sobol, pianist, Amanda Gundling, Conductor, and Dr. Danielle McRoy, the Ars Longa Quire is comprised of seven women singers: Nickolette Kacharaba, Cara Laban, Veronica Mainville, Jessica Mischke, Kimberlee Morritt, Sophia Pavlatos and Sherri Winick. The choral group’s name is derived from one of Amanda Gundling’s favorite Latin quotations, “Ars longa, vita brevis,” expressing the longevity of the arts in comparison to life’s brevity. As Elise Sobol explains, “Quire and Choir are both Latin. ‘Quire’ was used in prayer books before the more modern spelling of choir. The ironic thing about using Latin as the title for a modern women’s choir is that women were not allowed in the choirs of the early church. This brings a certain strength to our concept of a new women’s choir.” Following their collaborative work during the summer months of 2012, Elise, Amanda and Danielle formed this fine choral ensemble.
[box_light]The Quire’s Premiere Concert Program[/box_light]
As explained in the concert program, choral works performed include Child with the Starry Crayon by Eleanor Daley; Tomorrow Shall Be My Dancing Day arranged by John Rutter; Creo en Dios and Santo, Santo, Santo from Misa Pequena Para Ninos by Francisco J. Núñez; The Snow by Edward Elgar; Mon coeur se recommande a vous by Orlando Di Lasso (arranged by Don Malin); May I Be Happy (Metropolitan Trifon/Buddhist Prayer) by Paul Carey; Chattanooga Choo Choo by Harry Warren (arranged by Ingvar Widenberg); and How Can I Keep from Singing?, a Quaker Hymn arranged by Gwyneth Walker.

The program opened with Eleanor Daley’s Child with the Starry Crayon. This compelling and sensitive selection celebrates a young child’s revelation of the magical process and result of creativity and art. Its text originates in the poetry of Dinushi Munasinghe, a student in the 5th grade at Broadacres Junior School in Etobicoke, Ontario, Canada.

John Rutter’s arrangement of the Traditional English Carol, Tomorrow Shall Be My Dancing Day, has a text that is thought to have originated before the Seventeenth century. As Rutter conveys, the long existing connection of religion and dance has resulted in this choral piece’s unique and dynamic imagery. In its entirety, this selection is composed of eleven verses depicting each major event of Christ’s life including the Ascension. Text and tune were first printed together in 1833, and the members of Ars Longa Quire brought it forward vividly through the ages to enlighten the ears and hearts of the present day audience.

The Quire’s moving performance of Creo en Dios from Misa Pequena Para Ninos by Francisco J. Núñez was an expression of pure inspiration. As Núñez explains in his text notes, “The Spanish text of this entire five movement piece is derived from the five components of the Catholic Ordinary Mass. The third movement, Creo en Dios, makes use of segments of the original text,” and combined with Santo, Santo, Santo, this very moving choral piece affirms belief in one Almighty God, the Creator of both Heaven and Earth.

In The Snow by the British composer Edward Elgar, the audience experiences the Victorian Era’s romantic goal of sustaining the soul’s purity. The text was written by Elgar’s wife.

The deeply emotional and touching choral work, Mon coeur se recommande a vous by Orlando Di Lasso (translated and arranged by Don Malin), is actually a French madrigal from the Sixteenth century. In a plea of sadness and suffering from the heart, the author expresses the need to bid farewell from a partner in love, despite jealous words. For now he (or she), who once could smile and speak words of affection, can only speak words of rebuke for those responsible for separating the two lovers.

The haunting beauty of Paul Carey’s traditional Buddhist prayer entitled May I Be Happy is found in the second half of this selection. This prayer is actually Carey’s arrangement of a hymn originally composed by Prince Boris Petrovich Turkestanov, well-respected leader of the Russian Orthodox Church (1861 – 1934). This choral piece was named Metropolitan Trifon/Buddhist Prayer and exalts the idea of expressing gratitude for life’s simple gifts of joy, peace and freedom.

Harry Warren’s joyful and rousing Chattanooga Choo Choo, arranged by Ingvar Widenberg, is an irresistible celebration in big band genre of the original train on the Cincinnati Southern Railway line in 1880. This revered train formed the first travel link of primary importance between the North and South regions of the United States. First recorded by Glenn Miller and his orchestra in the early 1940s, this number is now performed by the Quire in line with the version made popular around the world by the well loved Andrews Sisters.
[box_light]The Program Ends as a Brilliant New Beginning[/box_light]
Concluding this very meaningful and empowering women’s concert journey along the various stages of creative expression in song, the Quire performed the vivid, resounding Quaker Hymn, How Can I Keep From Singing? Enhanced by Gwyneth Walker’s arrangement, this memorable piece lends strong encouragement to our ardent affirmations of an incorrigible passion for singing. Each distinctive piece of choral music researched and programmed by Amanda Gundling and Elise Sobol and included in this unique concert was performed with the utmost sensitivity and musical excellence by the Ars Longa Quire. This highly accomplished and dedicated choir of women singers under the acclaimed and expert direction of Elise Sobol, Amanda Gundling and Danielle McRoy, offered their audience the rare opportunity of experiencing choral music at its very best.

Attending their future performances is a must for any and all who possess a passion for beautiful choral masterworks and poetic songs composed and/or arranged for women singers. Join the journey along the latest exquisite creative path in song at the very next Ars Longa Quire performance. You will be mesmerized by the sheer beauty, deep sensitivity and extensive vocal accomplishment of their generous gift to you in song.

Ellen Gilmer Author
Ellen L. Gilmer is a published author, speaker and performance artist living in New York City. She has spoken and performed internationally and enjoys sharing her experiences with others. She has published two books with the Pentland Press Ltd. and Carnegie Publishing Ltd. in England: La Belle Famille, a novel, and Free Style Run of the Heart, a book of dramatic monologues with poetic songs. Her third book, published with Amazon.com, is entitled, Song Poems from the Cumulus Cloud and Creative Essays. She is also an active KDP Amazon publisher (for Kindle books). As an IPA member for many years, Ellen has now joined the IMPress staff to share her writing talents with our readers.
web
https://crystal-clear-writing-art-forms.com
×

Ellen Gilmer Author
Ellen L. Gilmer is a published author, speaker and performance artist living in New York City. She has spoken and performed internationally and enjoys sharing her experiences with others. She has published two books with the Pentland Press Ltd. and Carnegie Publishing Ltd. in England: La Belle Famille, a novel, and Free Style Run of the Heart, a book of dramatic monologues with poetic songs. Her third book, published with Amazon.com, is entitled, Song Poems from the Cumulus Cloud and Creative Essays. She is also an active KDP Amazon publisher (for Kindle books). As an IPA member for many years, Ellen has now joined the IMPress staff to share her writing talents with our readers.
web
https://crystal-clear-writing-art-forms.com
Latest Posts