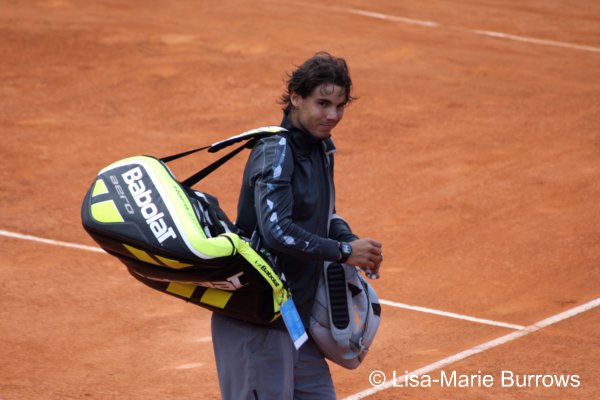 Internazionali BNL D’Italia, Rome – Out on Campo Centrale this afternoon the crowd were treated to a battle between the Spanish No.1 and the Spanish No.2 under the late afternoon sun, which started as an exciting spectacle but unfortunately for David Ferrer was not sustained against Rafael Nadal. The King of Clay has kept his run of straight victories going this week after knocking out his friend and compatriot 7-6 (6), 6-0 during the semi finals.

Surprisingly for the crowd and Rafael Nadal it was David Ferrer who opened up the match on fire and was the dominating aggressor from the onset. Ferrer was seeing the ball early, firing it deep and caused an uncomfortable start for last year’s finalist. His solid first serves were making it difficult for Nadal to participate in any lengthy rallies and with dogged determination he forced Nadal to have to save five break points.

During the fourth game of the set, Ferrer was the first Spaniard to break his opponents serve after applying pressure on Nadal’s second service game with some riveting blows and fantastic retrieval of some seemingly impossible shots. The joy was short-lived for Ferrer as Nadal stepped us his game and became more aggressive on short balls and turned defensive play into offensive, futile shots until he got back the break he so desperately needed. Maybe thoughts were reminiscent in his head of what had happened during the week before in Madrid against another compatriot, Fernando Verdasco which kick started his comeback?

The set remained on par and closely fought with both players having opportunities to surpass the other and the set was there was for the taking. The tiebreak loomed and the two best Spanish players went toe to toe throughout for 14 points with Nadal unleashing his formidable crosscourt forehand armory and after an equally balanced set from both players, Ferrer eventually succumbed to the power of the world No.2 and Nadal edged it out 8-6.

The second set did not open up as planned for Ferrer, as he lost his momentum and his intensity began to diminish, whilst for Nadal, it was business as usual and with an array of well-angled shots and great depth on the ball during the rallies Ferrer could do nothing but look in awe as the shots sailed past him.
Ferrer looked continually despondent and like a hunter seeks its prey, Nadal continued to hunt for the ball and keep his prey cornered. Before David Ferrer knew what was happening, the hardworking determined Spaniard was 0-5 down and staring at a possible bagel in the second set – and that is precisely what happened.

David Ferrer could not find the solution to beating Rafael Nadal on the dirt of Rome and lost his third match against his compatriot at this tournament:

“The first set it was close and then when I lost the first game and my serve it was more difficult to do wins and he played better.”

A semi final is a good result for Ferrer after an impressive clay court season and as always the world No.5 tried to fight and play his game of tennis when he was allowed.

David Ferrer is always a delightful person to interview despite his palpable disappointment and he is never rude or impolite to the media and tries his best to answer (and understand!) questions in his broken English. It is a shame for the talented Spanish No.2 that he is playing in an era of some of the greatest players of all time with Djokovic, Nadal and Federer often the people culpable for his exits and losses in finals. In any other generation, he may have won a Slam as his shot making is incredible, his athleticism is astounding and he possesses the imperative ability to turn from a defensive to offensive position in a matter of minutes. Nadal may be the most discussed and successful player in Spain, but credit should be offered to David Ferrer just as frequently because as a sportsman and representative of tennis, his presence and contribution is just as valuable. He is a real credit to the sport.

Nadal also reflected on the quality of Ferrer’s game, particularly at the start of the match:

[quote]“The first set was unbelievable how David set the match with amazing rhythm and aggressive and long. His movements were unbelievably good and so I did the possible best…”[/quote]

Rafael Nadal has now set up a mouthwatering encounter against world No.1 and defending champion Novak Djokovic and no doubt the Spaniard will be keen to secure another win against the Serbian before Roland Garros commences:

Rafael Nadal Fast Facts:
• Rafael Nadal is one of three players to rank at No.1 in the history of the ATP World Tour Rankings who have all reached the semi finals in Rome.
• He along with Federer, Ferrer and Djokovic have won 11 titles between them so far this year.
• Nadal has won this tournament in 5 out of 7 appearances in Rome.
• His four straight set wins this week have improved his lifetime record here to 35-2.
• After his win today, he has now recorded a 15-4 head to head record against David Ferrer and beaten him 12 times in a row on clay – 10 out of 12 wins in straight sets.
• Nadal is 3-0 against Ferrer in Rome.
• Nadal is through to his 70th career ATP World Tour level final and his 31st ATP World Tour Masters final.