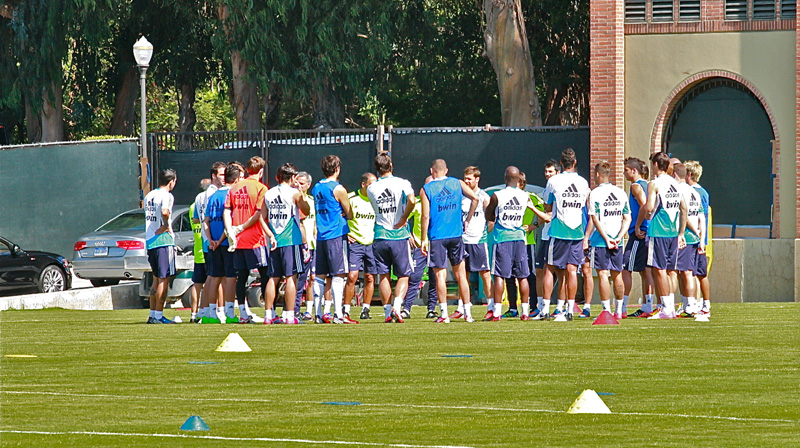 On Sunday morning, Real Madrid arrived to the beautiful UCLA campus in Los Angeles to hit the fields for the first of several practice sessions in preparation for their upcoming game against the LA Galaxy.

Enthusiastic fans eagerly awaited their arrival behind barricades lining the entrance to the fields, hoping to catch a glimpse of some of the biggest names in soccer including Cristiano Ronaldo, Iker Casillas, Kaká, Mesut Özil, Sergio Ramos and many more.  Ramos stopped to sign autographs and greet the expectant Real Madrid enthusiasts.

The team’s first two practices at the famous university have been, as is customary for coach Jóse Mourinho’s workouts, highly demanding and focused primarily on ball work.

The players have had some time for fun, though, as they joined up with Miguel Montero and Gerardo Parra of the Major League Baseball (MLB) team, the Arizona Diamond Backs.    The two Venezuelan athletes brought bats and gloves to the North Athletic Field of UCLA’s sprawling campus and dared the famous soccer players to try their hand at baseball.   Kaká, Callejón, Xabi Alonso and Higuaín took their turn at the favorite American pastime.

The renowned coach, Mourinho, along with his coaching staff, also stepped off the field to sit down with 200 some coaches to share some of the secrets of his tremendous success.   Mourinho shared, “It is hard to explain the reason for our success; I have been asked it many times throughout my life, especially by the press. Quality, unity, passion, work methods… there is not just one or two reasons. There are a lot of factors and they must work in unison.”  Before the captive audience, Mourinho and his staff spent the next two hours detailing the key principles that have contributed to their continued excellence in the sport.

The week of practices and festivities lead up to Real Madrid’s friendly game against Los Angeles’ own team, the LA Galaxy.   This year marks their third consecutive annual meeting in Southern California.   As part of the 2012 World Football Challenge, the game will take place on Thursday, August 2 at the Home Depot Center in Carson City.  The match-up is game number six of the nine game challenge series and is the first of Real Madrid’s four games in the 2012 Challenge.  The reigning La Liga champions will also face Santos Laguna in Las Vegas, AC Milan in New York, and Celtic in Philadelphia.