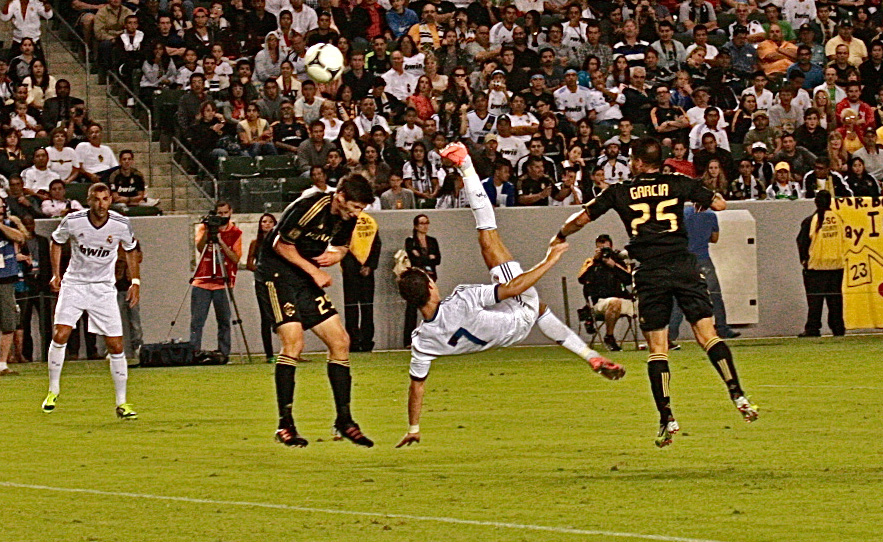 It took less than two minutes for Real Madrid to set the tone for the evening in the highly anticipated exhibition match between Los Blancos and the locally based LA Galaxy on Thursday night. With a perfectly placed pass from Real Madrid midfielder, Angel Di Maria, Gonzalo Higuain slipped one past goalkeeper Josh Sanders.  The enthusiastic crowd of 30,317 – the highest number of fans to ever gather in the Home Depot Center for a soccer game – went wild. Real Madrid was off to the early lead.

Make it 2-0 just nine minutes later when Di Maria decided to send his own shot to the back of the net. The crowd broke out in a chant, “Ma-drid, Ma-drid, Ma-drid.”

The California club would earn the next goal when David Beckham – in a characteristic play – floated a free kick to David Junior Lopes. At 23 minutes, Galaxy scored their first and last goal of the evening.

Real Madrid quickly took back their two-goal lead when Jose Callejon flew through Galaxy’s defense for an easy finish. The visiting team went in to halftime leading 3-1.

As both clubs had agreed prior to the match to play two different teams during each half, Beckham took to the sidelines while Cristiano Ronaldo rushed the field for Real Madrid. In an exciting second half, the enthusiastic crowd cheered, gasped, sighed, and screamed at the quality play. Real Madrid chalked up two more goals by Alvaro Morata at 49 minutes and Jesse at 84 minutes.

But the highlight of the second half may well have been one that did not make the scoreboard, as Ronaldo shot a beautiful bicycle kick that didn’t quite convert. The crowd didn’t seem to mind, though, as the stadium erupted in delight. The friendly match came to a close right at 90 minutes, with a decisive 5-1 showing from Real Madrid.

In the words of Galaxy coach Bruce Arena, “Tonight was a great night for fans . . . [the exhibition] was outstanding . . . it was a good training session for us and for them.”

“I am never happy to lose a game,” Arena commented while commending the play of his younger team members. “[but] Madrid’s commitment to the game was outstanding.”

When asked about the caliber of his current Real Madrid team, coach Jose Mourinho commented, “I was always a lucky coach . . . Real Madrid is difficult, we demand a lot, we have great players . . . Keep the attitude, keep the appetite, that’s important.”

This match marked the first of four for Real Madrid in the United States, as they close out the 2012 World Football Challenge. They will face Santos Laguna in Las Vegas on August 5th, AC Milan at Yankee Stadium on the 8th and Celtic on August 11th in Philadelphia.