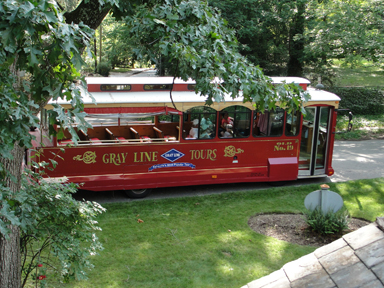 Gabe Green, a prominent Asheville businessman in 1929, got word shortly after the 1929 stock market crash that the area banks were about to close. He rushed out at the last minute to withdraw all of his cash.

Another businessman heard the same warning and sent his secretary over to the bank to do the same. But instead of returning with cash, she brought him a check. Of course, the bank closed the next day, as predicted, and the check was worthless.

You’ll hear this story and many more when you climb aboard the popular Grayline Trolley Tour’s red trolley in Asheville, North Carolina for a fascinating 1.5 hour city tour. Slip away from the “forced marches” of tourism tours and enjoy a leisurely day at your own pace and on your own terms.

John, a former teacher turned animated tour guide, detailed interesting history and humorous anecdotes of Asheville’s small frontier outpost beginnings from 1797 to the present. He didn’t gloss over the city’s history of financial woes nor hesitate to admit that for some 46 years, Asheville was two virtual ghost towns: a boarded up downtown area and the river front industrial section. Today the old river district’s once broken-down factories have recovered and are home to more than 120 working artist studios. The largest free music festival in the southwestern part of the U.S. takes over the River Arts District for three days during the last weekend of July, one of the revitalization committee’s ideas to lure people back into Asheville.

Asheville has made remarkable strides. It’s a quaint, beautiful yet eclectic city with diverse architecture. Dozens of publications have named it as one of the best American cities to live, to retire, and to run a business. Other accolades include 2010 Beer City USA (thanks to eleven microbreweries), Top Small City (2011 population of 83,000), and Best Southern Town. The city is also proud of its status as one of the best vacation spots in America to visit with your dog. There are doggy daycares, doggy bakeries and doggy spas everywhere, and the four-legged pets are welcome in restaurants and stores – at least in the downtown area – when accompanied by their owner.

The historic and picturesque Montford neighborhood – one of North Carolina’s largest historic areas – is on the National Register of Historic Places. About a dozen stately B&B’s are sprinkled throughout the quiet neighborhood’s individually-styled Victorian, Queen Anne, Neo-classical, Colonial Revival and Bungalow homes. Architect Richard Sharpsmith gained notoriety for “inventing” pebble dash siding. Pebble dash looks like stucco but is more substantial. The process was developed with masonry pebbles mixed with white cement and then dashed – literally thrown onto the side of a house – hence its name. There are many fine examples of pebble dash houses still standing throughout the city. 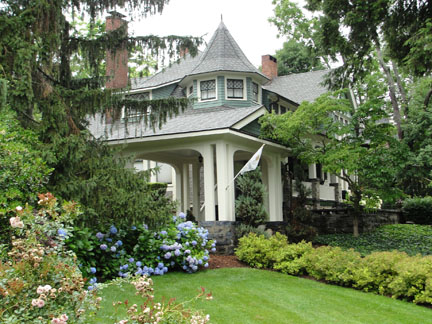 The stately Queen Anne’s with their wrap-around porches and multi-colored facades are not only beautiful, but also served an important purpose during their heyday. In the early 1900s, Asheville was the leading city for lung disease treatment. At an average elevation of 2,165 feet, it was widely believed that the city’s mountain elevation was ideal for treatment. (Asheville is situated in a large valley of the Blue Ridge Mountains.) And the reason for so many porches is that they were sleeping porches. People coming for lung treatment actually slept outside hoping to benefit from the “therapeutic” mountain air. Additionally, Asheville was the first U.S. city to open a tuberculosis sanitarium and the first to develop a test for TB.

Moving through the refined Highland Park area, John pointed out the dormitory building next to the former Highland Park Hospital where Zelda Fitzgerald lived while undergoing shock treatment for schizophrenia in the late 1940s. Asheville has more art deco buildings than any other U.S. city, John confided, as we passed through Norwood Park.

Our red trolley meandered up and down tree-lined streets beside arts and crafts homes of Norwood Park leading into the more affluent Grove Park neighborhood. We paused briefly in front of William Jennings Bryan’s former home before continuing up the hill past the golf course to the impressive Grove Park Inn with its dramatic view of Sunset Mountain.

Millionaire E.W. Grove constructed the massive hotel in 1912. It required 405 men working 10-hour days for 11 months and 27 days. They earned $1 a day, the highest wage in the area for the time. The five-foot cement walls and terra cotta roof tiles were considered the ultimate in fireproofing. Ten presidents have lodged at the Grove Park Inn including Franklin Delano Roosevelt, Richard Nixon, George H and W Bush, Bill Clinton, and Barrack Obama.

According to John, during WW2 the Federal government leased the Grove Park Inn and used it as an internment camp for German, Italian and Japanese diplomats. After the war ended, returning soldiers came here for their R&R before final discharge. 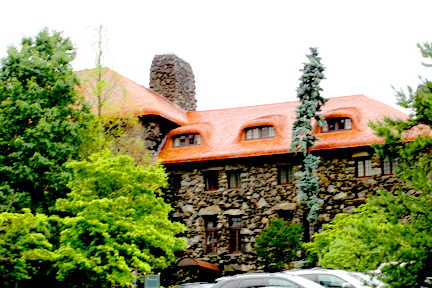 Grove himself was apparently quite the innovative entrepreneur. He began his career as a clerk before becoming a pharmacist. Back in the 1800s, pharmacists were called doctors, thus, Grove went by Dr. Grove. He made many successful products with quinine; a bitterly tasting liquid used to treat malaria. His most successful product was Grove’s Tasteless Chill Tonic. He mixed it up with sugar and sold it as a preventative of malaria. John explained that he sold more bottles of this than Coca Cola sold bottles of Coke, and ultimately became a millionaire. His business was later sold to Bristol Myers.

And don’t miss the two Sears Roebuck mail order houses near Grove Park! Ordered from the popular catalog, the houses cost $800 each. Pieces were put into a rail car and transported anywhere desired. Each piece came numbered to aid in construction along with a 300-page instruction book! The art deco design continues into the center of town. The city hall building is particularly impressive. 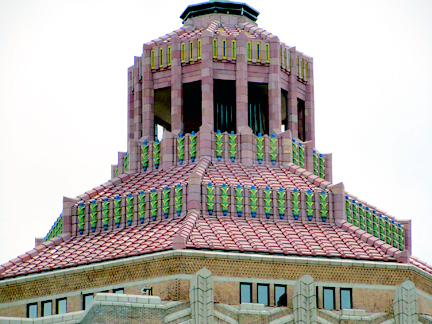 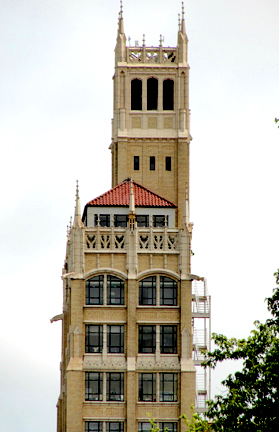 On the roof are green and gold chevrons representing feathers in honor of the Cherokee people who originally populated the region. Another historic art deco building is the SW Cafeteria structure with its black, gold and blue art deco trim by the famed Douglas Ellington. The Woolworth building – another Ellington art deco edifice – is now a bustling gallery featuring the work of regional artists. The original red-lit Woolworth’s cafeteria light remains in the window, and its original soda fountain still operational. The menu features such throwbacks as Double Decker Grilled 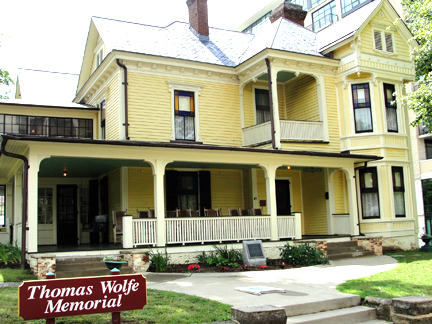 I hopped off at the historic Thomas Wolfe House to linger behind for the house and museum tour, free as part of the trolley admission. Wolfe’s mother, Julia, bought and ran the yellow clapboard as a boarding house renting by the bed rather than by the room. Young Tom, the baby of the family, lived there for ten years with his mother. He never had his own bedroom; rather, he slept in any available bed, and when there were none, he slept under the large old farm table in the busy kitchen. The simple home boasts character and elbow grease instead of polished marble floors, coffered ceilings and glittering chandeliers.

Re-boarding the familiar red trolley about an hour later, my new driver headed to Grove Arcade in downtown, once only the third shopping mall in America. The exterior façade’s perimeter details a man’s face with a pig’s nose. It is of a man who allegedly owed Dr. Grove a great deal of money, but never paid him. Inside, the cozy shops feature unique items; mostly one-of-a-kind, handcrafted ranging from wood furniture to clothing, decorative candles, and astonishing jewelry. 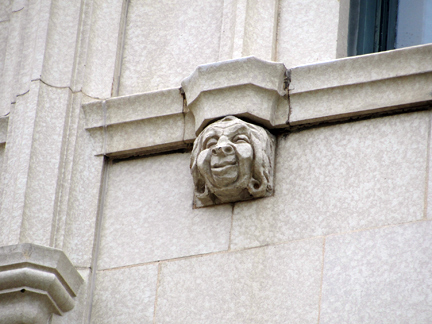 Today, and since the revitalization plan of the 1970s, no chain stores or franchise restaurants are permitted down town. Regional artists, independent bookstores, mom and pop eateries, craft breweries and pubs, and eclectic shops dot the downtown landscape. And the dog and people-watching…. well, that’s a whole different article! In the evenings and on weekends, street performers and mimes take up spots on street corners plying their musical and artistic talents to eager passersby who, of course, are enthralled pausing to take it all in. You can feel the pulse of the area’s energy.

Since the trolley is a leisurely hop-on, hop-off tour, I easily made it a day of sightseeing. It was an excellent way to learn interesting facts of Asheville’s storied history, meander through the various historically significant areas, and spend time exploring other sites, such as the Thomas Wolfe House, along the route.

Sure, I could have bought a slick tour book and walked the Urban Trail route downtown to learn about Asheville’s history, but John’s captivating stories of early Asheville with its colorful characters would have been lost. I would have never known, for example, that the Jackson building, Asheville’s first skyscraper and tallest building swirling toward the sky, with its prominent bell tower, had a story to tell. When the building first opened, the bell tower held a 400-power telescope and an 18-million power searchlight. At night the searchlight was turned on in hopes of attracting people to the city.

And how about the series of circles embedded into the sidewalk at the base of the building? Once a former bank, the circular design supposedly represents a bull’s-eye, and marks the site where numerous people jumped to their deaths following the stock market crash.

As the day deepens, we pull into the Visitor Center lot to disembark. Asheville’s depth of history is storied and varied; its landscape history a testament to the city’s dramatic past. If you find yourself in Asheville with at least one day to spare, don’t miss the red trolley tour’s visual feast!

Tours operate daily, seven days a week, March through December other than major holidays. One complete loop lasts approximately 1.5 to 1.75 hours, or take advantage of the hop-on/hop-off system and make a day of it. Tour cost is $20 for adults. Tickets are available at the Asheville Visitor Center, most tour stops, and at the front desk of many Asheville hotels, inns and B&B’s. You can also board the trolley at any stop and purchase our ticket from the driver during the tour. More information is available at www.graylineasheville.com.