A November New York night, it is cold and wet as heavy rain pounds the streets.  Seemingly unfazed by the elements are lines of people two city blocks long awaiting entry to the Brooklyn Bowl club for the show. They must know their wait will be worth it. An air of anticipation can be felt as the crowd files in. All that can be seen on the dark stage is a single spotlight illuminating a pedal steel guitar at the front. Through just over a decade now as Robert Randolph and the Family Band (RRFB) grow in fame, they have been said to be carrying the torch for the Sly Stone/James Brown sound in rock & roll. Yet they do it with an original style.  Robert Randolph, the band’s front man and singer is also a virtuoso guitarist and truly a pioneering musician. He has brought the pedal steel guitar, historically a background instrument, to the front of a rock & roll stage like no one ever before has done.

The crowd’s wait is over as Randolph sits and strikes his first note – an electric searing sound. The lights go up, so does the crowd and show is on as his Family band backs up Randolph with a driving beat of pure energy. His fast paced solos over the band’s funk based grooves reach such power and energy that hardly anyone in the building can stay in their seat, including Randolph. He himself seems to have a hard time remaining in his chair when the music begins to pour through him. Sometimes he  has to stop and run around his 13 string desktop style instrument just to blow off the steam he creates when his fingers touch the sacred steel. Song after song RRFB has the crowd moving and dancing and singing in this rock and roll funk and soul church revival. Finally, Randolph brings it down a notch and both the crowd as well as the band seems to catch their breath. A buzz however begins to filter through that there may be  a guest appearance by another virtuoso musician. A rumor floats that a Blues Traveler has made the trip through the rough weather and is in the building.

[box_light]Randolph’s Talent Attracts  A – List Stars[/box_light]Jamming with stars on stage is nothing new to Randolph. In the early 2000’s before RRFB even had a recording contract, Robert Randolph’s talents on the pedal steel gained so much acclaim in the NJ/NYC music scene that he was continually asked to perform with other more established musicians. His first big break came when the avant-garde jazz keyboardist, John Medeski and the blues based band, the North Mississippi All-Stars, invited him to join their jam project, The Word, in 2001. He then was invited to tour with Dave Matthews whom he has collaborated with periodically ever since. After RRFB’s first studio release in 2003, Unclassified, he caught the attention of guitar ‘god’ Eric Clapton and joined his 2004 tour.

[box_light]Makes Top 100 All-Time Guitarist list by Rolling Stone Magazine[/box_light]Since then, the invitations have continued to mount as the RRFB has been accepted by musical giants old and new playing shows with such stars from BB King to John Mayer. Yet another honor by invite, Randolph was recently added to the all-star line-up of guitar greats in the annual ‘Experience Hendrix’ tours. Beyond being a four-time Grammy Nominee, if there was any question how well respected he rates among his peers, Rolling Stone magazine recently listed Randolph as one of the top 100 guitarists of all-time. Unlike many of the legends that accompany him on that list however, Randolph was not an original blues based guitarist.

His roots are gospel. “Being from the inner city, I of course picked up on some hip-hop but I grew up in the House of God church. I was only allowed to listen to modern Christian and gospel music growing up. There was still so much other music I didn’t know about.”  Randolph said, “So I come from a little different place than many guitarists. The pedal steel was a big part of our church tradition. I grew up watching older guys play, so that gospel (Sacred Steel) sound influenced me.” Randolph went on to say that even gospel singers like Mahalia Jackson and Aretha Franklin influence his playing as he attempts to reach what they do with their voices on his pedal steel guitar. 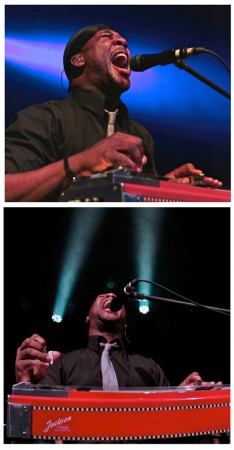 [box_light]Gains Influence of SRV[/box_light] That all began to change however when Randolph was introduced to the music of Stevie Ray Vaughn. “Once I heard Stevie, that was it. When I was nineteen, someone gave me tickets to a Stevie Ray Vaughan (SRV) concert. After that, I wanted to play pedal steel like Stevie Ray played his guitar. I wanted to take another path than the people who played traditional pedal steel to take it to a whole new level.” Randolph devoured Vaughn’s music and then began a search of blues and blues-rock musicians that pre-ceded SRV such as Hendrix and Buddy Guy etc.  Randolph’s search continues today. His new album, We Walk This Road, is a search to go even further back in the blues roots music style of the 20s & 30s.

His collaboration with T Bone Burnett as producer on We Walk This Road, led Randolph into lessons of blues history and music. On Randolph’s website he states, “This record is a celebration of African-American music over the past one hundred years and its social messages from the last thirty. T Bone Burnett shared the vision of how gospel, blues and rock could be put together in a way that could relate to my history and connect to my present. T Bone listens to music that our grandmothers would listen to as children–not even music that our fathers listened to, but songs that go even further back…some from Gospel and Christian blues, the music that people working in fields across the south likely sang nearly a century ago. Those are the real roots of rock and roll, where everything else comes from.”

[box_light]New CDs Walk Road of Blues History[/box_light]While his latest album, We Walk This Road, tackles the blues roots, his playing is still transcendent both in the studio and at his live performances.  Attempting to capture that live vibe with the new songs, Randolph also released a new live CD simply named, Live in Concert.  The CD includes several songs from We Walk This Road, and a few covers as well, the finale being Jimi Hendrix’s Purple Haze.  How appropriate since Randolph takes the blues and gospel in rock to another level on the pedal steel much like Hendrix did  with a stratocaster.  At the mid set break of this live show I asked if we’d get to hear Purple Haze tonight. Randolph smiled but wasn’t telling and humbly shied away from the Jimi comparison.  Then I mentioned that his #1 guy, Stevie Ray Vaughn was heavily influenced by Hendrix, to which Randolph gave me a look that said, “Naturally!”  “Hendrix, he’s the greatest guitar player of all-time.”

[box_light]Jimi Hendrix Comparisons[/box_light]Another virtuoso musician, John Popper, whose style is transcendent of his instrument, the harmonica, is in full agreement on Hendrix influence. The rumor is true. The Blues Traveler is here and will be sitting in with RRFB.  I reminded Popper I once worked for the Blues Traveler video crew in the mid-90’s to brake the ice.  Popper said with a laugh, “I can’t say I recall but…Howya been anyway?”

[box_light]Blues Traveler John Popper Appears[/box_light] When asked about playing with RRFB he said, “He (Robert) is a wonderful player, that’s obvious and they (RRFB) are just a great band whose live show is truly powerful. It’s a blast to be able to sit in.”  Popper’s Blues Traveler came out of the 1990’s jam band wave and they were anything but straight ahead blues. Recording tasty pop hooks while playing improv-jam centered live shows allowed Blues Traveler to become a  Grammy Award winning, platinum selling band with both massive pop success and critical acclaim.  I asked Popper if his musical style and RRFB’s lend to good performances when they  get together since RRFB was based originally in gospel while Popper’s stemmed in rock/pop? Do they both pull from the blues? Popper reminded me, ”Well yes both our influences are pretty varied. Depending on the day for me, I’m into anyone from the Beatles to Vivaldi to Miles Davis but I started on the Blues Brothers which led me backwards to Paul Butterfield and Little Walter etc.” Looking at Randolph, Popper continued, “So if he’s working from SRV to Jimi to Muddy etc. then we both have that to draw on at some point even if our origins and influences are varied but when you jam it’s just flowing, you aren’t thinking about it.”

[box_light]2 Virtuosos Rock NYC-Live![/box_light]Randolph and Popper will occasionally sit in on each other’s shows.  They obviously enjoy the jam.  I wonder if they note that both artists have in common playing historically side-man instruments as front-men and yet have both been compared to Hendrix in how they play…and that both are from New Jersey!  They smile in the prideful bond of their home state as Randolph says, “We all try to take from what Jimi gave us.” Popper said, “Hendrix changed my life and when you get musicians who aren’t afraid of taking chances and extending where the music will go, when playing live, that recipe can make for a good night.” And a great jam.

The two musicians pushed each other through the live show into the night.  Popper, who has been called the ‘Hendrix of Harmonica’ was on fire. The crowd was over taken by the call and response of the two virtuosos at their craft. Somewhere Jimi Hendrix was smiling.

*Blues Traveler plays Brooklyn this month and has a new CD out, Suzie Cracks the Whip. More info on Robert Randolph and Blues Traveler can be found on the following websites which all led in research for this story.

Hurry Up & Hang Around • Out Now