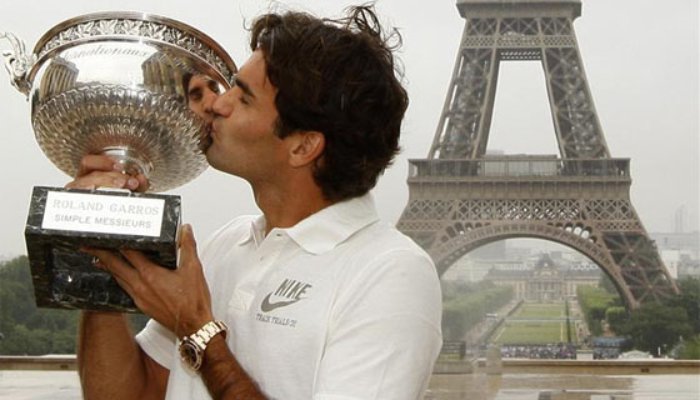 [dropcap]W[/dropcap]orld No.3 and 16-time Grand Slam champion Roger Federer is appearing in his 13th appearance this week at Roland Garros and has already added yet another milestone to his illustrious career this week as he won his 233rd match at a Grand Slam, equalling the Open era record set by Jimmy Connors.  His best performance at the French Open was in 2009 when he was eventually crowned champion and achieved the Career Slam after lifting the trophy on the dirt, a feat which some feared would elude him during his career.

The Swiss superstar has achieved great things at Roland Garros having won the tournament, he has appeared in four finals before losing at the hands of clay court nemesis and ‘King of Clay’ Rafael Nadal and was the first man to defeat current world No.1 Novak Djokovic in the semifinals after his brilliant run in 2011.  What will he achieve this year?

1999: This was the year that Roger Federer made his debut on the ATP Tour and although it was brief, he managed to take the opening set 7-5 off Patrick Rafter who was then ranked world No.3  and showed flashes of the brilliance in his career that was yet to come.

2000: A more experienced Roger Federer took to the dirt of Paris during the new millennium year and surpassed three more rounds than the previous year.  During the opening three rounds, Federer dispatched of Australian Wayne Arthurs, popular Amercian Jan-Michael Gambill before eventually losing to Spaniard Alex Corretja in the fourth round.

2001: This proved to be a big year for the young Swiss maestro as he reached his first ever Grand Slam quarterfinal at Roland Garros before eventually meeting Alex Corretja once again in the last eight at the French Open.  A couple of weeks later, Roger Federer became the first man to defeat defending champion and idol Pete Sampras at Wimbledon.  He was the player who ended his 31-match winning streak in an epic five sets. Was this the biggest turning point in his career?

2002: This was not a great, memorable appearance for Federer at Roland Garros after his quarterfinal performance the preceding year after losing to tricky opponent Hicham Arazi 3-6, 2-6, 4-6 in straights sets during the opening round.  It was a surprising loss for him and for many as the Roland Garros quarterfinalist had recently won in Hamburg and was No.2 in the Champions Race.

2003: Once again for Roger Federer, he could not improve on his first round performance of 2002 and lost in straight sets at the hands of then world No.88 Luis Horna of Peru.  Some started to question Federer’s ability to win a Grand Slam as he was ranked world No.6 and still under performed at a Slam – at least until Wimbledon where he silenced his critics and beat Mark Philippoussis in straight sets.

2004: Roger Federer finally ended his run of first round defeats at the French Open and made it through to the third round after defeating German Nicolas Kiefer, before falling at the hands of French Open champion and clay court specialist Gustavo Kuerten of Brazil who was ranked No.30 at the time.

2005: This was the making of Roger Federer’s ability and belief to progress into the latter stages of the tournament having fought off tricky customers and clay court specialists en-route to the semifinals in the form of Nicolas Almagro, Fernando Gonzalez, former French Open champion Carlos Moya before losing to eventual champion and friend of Moya, Rafael Nadal.  This was the first of many meetings between the pair at Roland Garros and was to be the start of a very fruitful rivalry between the Swiss Grand Slam champion and the up-and-coming teenager Rafael Nadal.

2006: This was one of the most successful years for tournament victories for the Swiss to date.  At Roland Garros he finally made it to his first final on the dirt of the tournament. His confidence soared as he defeated foes who would become regular challengers over the next couple of years including Tomas Berdych, Mario Ancic and David Nalbandian. In the final he met his conqueror of 2005 and defending champion Rafael Nadal whom he lost to in four sets, despite taking the opening set from the world No.2.

2007: Federer had another excellent campaign at Roland Garros, making it through to his second final at the championships.  He defeated Rafael Nadal three weeks before in Hamburg on the clay but once again could not knock the king off his throne in Paris as he experienced his third successive defeat at Roland Garros to Nadal and his second successive final defeat at the hands of the Spaniard and became the runner up in the Parisian capital.

2008: Federer was in good form coming into the second Grand Slam of the year having won in Estoril and reached the finals of Monte Carlo, Hamburg and once again… at Roland Garros.  Unfortunately for the frustrated world No.1 each defeat in the final was down to rival Rafael Nadal and Federer could do nothing more than look on as the Spaniard lifted the trophy for the third year running. The third was a charm for Nadal and third time UNlucky for Roger Federer.

2009: It was a nail biting, nerve-wrecking tournament for Roger Federer in Paris in 2009 as he was nearly knocked out of the tournament in the round of the last 16 against Tommy Haas as well as in the semi-final against Juan Martin Del Potro and had to battle through in a tough five set encounter. With determination, skill and undeniable grit, he eventually managed to reach the final against Robin Söderling, who defeated Nadal in the fourth round. In his fourth final in Paris and in a match he was so desperate to win, Roger completed the task of winning at Roland Garros and accomplished his career Grand Slam. With his victory on the red courts of Paris, Roger also equalled Pete Sampras’ record of 14 Grand Slam titles.

2010: Federer’s mission to defend his title at the French Open was halted by the man he beat in the finals the previous year – Robin Söderling.  The Swede avenged his loss during the quarterfinals and it was the first time in 23 Grand Slam tournaments and over 6 years that Roger did not reach the semifinal stages of a Slam.

2011: Last year, Federer put the unexpected loss of 2010 firmly behind him, as he once again reached the finals in Paris.  The Swiss hero had a tough draw having to dispatch of Feliciano López, Janko Tipsarevic, compatriot Stanislas Wawrinka, home crowd favourite Gael Monfils and the in-form Australian Open champion Novak Djokovic in the semifinals.  During the final, Roger Federer met…. yes you guessed it…. Rafael Nadal. Despite managing to take the third set off the Spaniard in a bid for resurgence, the Roland Garros champion was too strong for Federer and he eventually lost the final 1-6 in the fourth set.

2012:  As Roland Garros is already in full swing, it will be interesting to see how Roger Federer advances through the tournament and whether or not he can lift the trophy once more – or possibly set up another mouthwatering against his clay court nemesis Rafael Nadal.