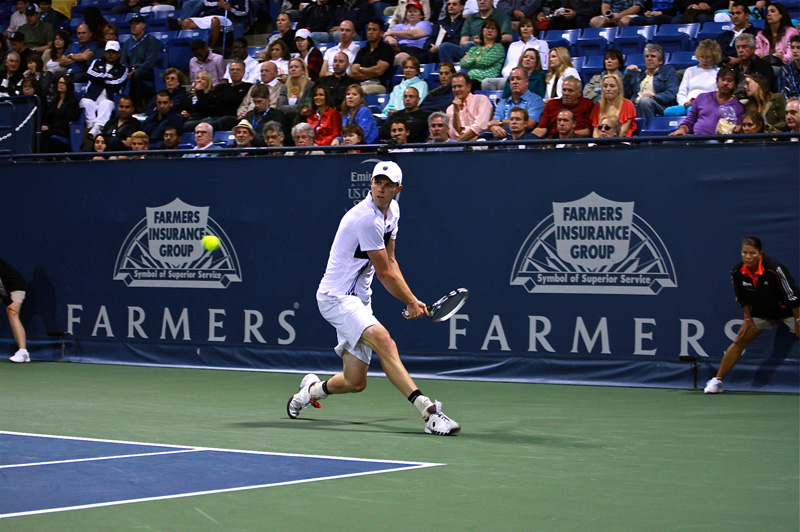 For the third time in four years, Sam Querrey will be playing in tomorrow’s final at the Farmers Classic at the UCLA Tennis Center. After struggling through the second-set of his semi-final match against fellow American Rajeev Ram, the two-time champ pulled out the victory in a second set tiebreak, winning 6-3, 7-6 (7-4).

The six-foot six Querrey has breezed through the tournament thus far, however, he was noticeably frustrated early on in the second set in tonight’s semi-final match. He quickly fell behind when Ram broke his service game, trailing 4-1 before he was able to rally back and force the tiebreak.

After 19 unforced errors in the second set alone, Querrey came out focused at the start of the tiebreak. He was able to secure the early mini-break to go up 1-0. The remaining 10 points played out on serve, giving the crowd-favorite the win.

“It was tough,” Querrey said after the match. “Rajeev is one of the few guys that still kind of serves and volleys and uses his slice well, so he makes it kind of uncomfortable out there and makes it tough to play. Fortunately I got that one break in the tiebreaker and then served well the rest of the way.”

Querrey will take on the underdog, qualifier Ricardas Berankis, in tomorrow’s final. Berankis ousted the number six seed, Marinko Matosevic, in his semifinal match early this afternoon. After a close first set, Berankis, pulled ahead by breaking his opponent’s serve to go up 6-5. He served out the set and went on to win six of the next seven games, sailing through to the finals with a 7-5, 6-1 victory over the Aussie.

The little known Berankis has had a remarkable showing at the Classic, ousting three seeded players without dropping a set. He is the first Lithuanian to ever reach an ATP Final.

When asked about his tournament run, Berankis said, “It’s really amazing . . .I really didn’t even think of it before coming here. You still have it in your mind a little bit, but when you come to play qualies it’s difficult to think of the final. Still, I had that belief in myself. I’m feeling great on the court at the moment and looking forward to tomorrow.”

Querrey spoke highly of his opponent, stating, “He’s been playing great all week . . . He came through qualifying, so he’s already won seven matches and that’s tough to do anywhere. He’s going to be ready to go and playing well, I’m sure. He hits the ball pretty big for a guy that’s only 5-8. He’s not lacking for pop on his serve or his groundstrokes.”

Querrey and Berankis will face off tomorrow afternoon at 1 PM PST.