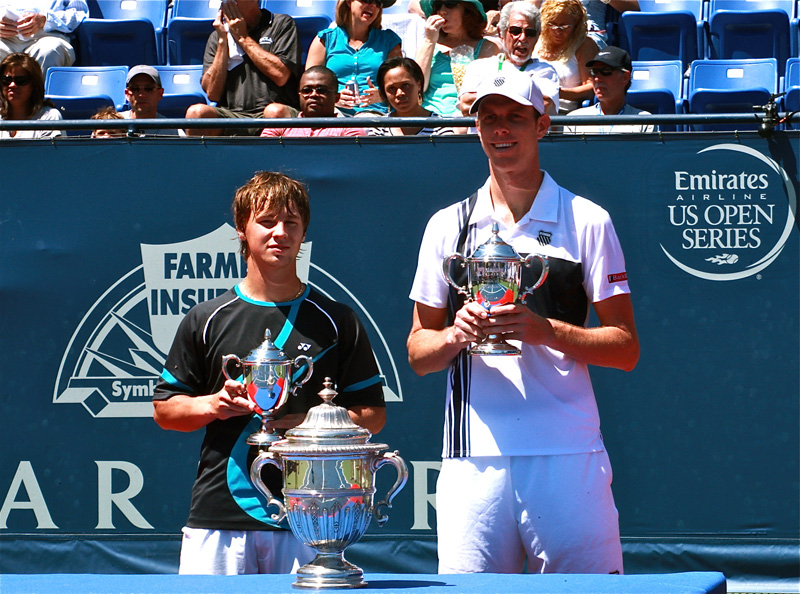 American Sam Querrey cruised through the final singles match of the Farmers Classic today to defeat Lithuanian qualifier, Ricardas Berankis, 6-0, 6-2, at the LA Tennis Center in the heart of the UCLA campus.

Querrey served up a total of eight aces and converted five of seven break point opportunities to win the tournament and end the remarkable run to the finals by Berankis. Berankis entered the event by winning his qualifier matches and ousted three seeded players before meeting Querrey this afternoon.

Querrey won 24 of 33 points in the first set, sailing to a 6-0 victory in just 18 minutes. Berankis struggled to find his rhythm during the first set and later admitted to both mental fatigue and nerves as the reason. He has played 13 matches in the past two weeks with only two days off. This was his first ever ATP final as well as the first for his country, Lithuania.

While Querrey was certainly the crowd favorite, the fans rallied behind the 5-foot-8 Berankis when he won his first game with a drop shot at 3-1 in the second set.

After the match Berankis said. “I was nervous in the first set, that’s for sure. I didn’t play as I would like to play . . . In the second set, a couple of games, here and there, I loosened up a little bit. The crowd helped me. The crowd was great and I really enjoyed it. I was trying to stay focused and trying to do my best.”

Berankis did have three break point opportunities in the second set, but was unable to convert. Querrey dominated with his characteristic powerful forehand and menacing serve – clocking in at over 135 mph. He won the match in just 51 minutes, the shortest final of the ATP tour.

“I did a really good job of focusing on all the big points, all the break points on his serve and mine,” Querrey said. “I came up with some big serves and some good forehands, just kept my foot down on the pedal and played solid on the break points that I faced . . . I feel like I’ve always played well here and it all came together this week and especially today.”