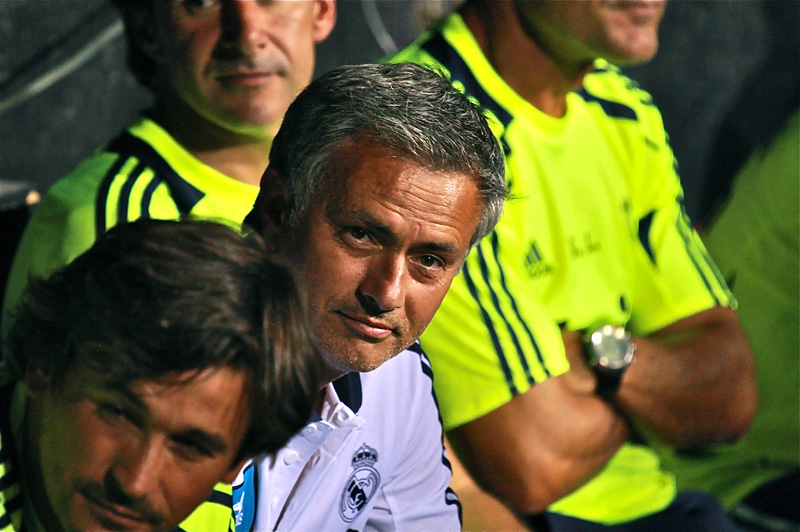 [dropcap]R[/dropcap]eal Madrid went head-to-head with Mexican Champion, Santos Laguna, before a record-breaking crowd of more than 29,000 soccer enthusiasts at the Sam Boyd Stadium in Las Vegas on Sunday evening.  In the stifling heat of the Nevada desert, the two teams took the field, this time with Cristiano Ronaldo, Xabi Alonso, and Mesut Özil starting off the first half for Los Blancos.

It was clear from the start that this would be a tougher game than Real Madrid’s debut match against the LA Galaxy, played on August 2nd in Los Angeles as part of its pre-season US tour.  The Spaniard and Mexican clubs came out strong and battled between the goals for the first 14 minutes of the match when, on an assist from Alvaro Arbeola, Xabi Alonso’s 30-yard strike sailed into the goal and gave Real Madrid the advantage, 1-0.  The Mexican club responded quickly, though, with a goal of their own by Cristian Suárez during the 25th minute of play.

True to his pre-game strategy, Real Madrid coach, Jose Mourinho, sent in an entirely different team for the second half of the friendly game, while Santos Laguna left its line-up virtually untouched.   The two teams were feeling the heat in the second half, with each garnering a yellow card for their intense and physical play.

In the 72nd minute, Oswaldo Sanchez, goalie for the Santos Laguna team, lost control of a shot on goal that eventually ricocheted off of Sami Khedira’s face and into the net. While the German player held his face from the pain of the hit, the Real Madrid team celebrated the winning goal.

International superstar Cristiano Ronaldo evoked mixed reactions from the crowd, from wild screams as he took the field to collective booing when his attempts on goal failed to convert.  While he and Kaká were clearly the focus of crowd attention, neither player had a significant impact on the outcome of the game.

“It was a big honor to play one of the best teams in the world,” said Benjamin Galindo, manager of Santos Laguna. “Nowadays there are no friendly games. Our team is always looking to win, and I was happy with the team’s performance.”

Real Madrid’s assistant coach, Aitor Karanka commented on the game saying, “This was a physical game. It was a tough game and Santos came prepared and played well.”   Of his team, he stated, “We look strong and active. We are growing every game.”

The game was the second in a series of four friendly match-ups for Real Madrid as part of its participation in the 2012 World Football Challenge. The team will travel to New York to face-off with AC Milan at Yankee Stadium on the 8th, followed by its final game against Celtic in Philadelphia on the 11th.