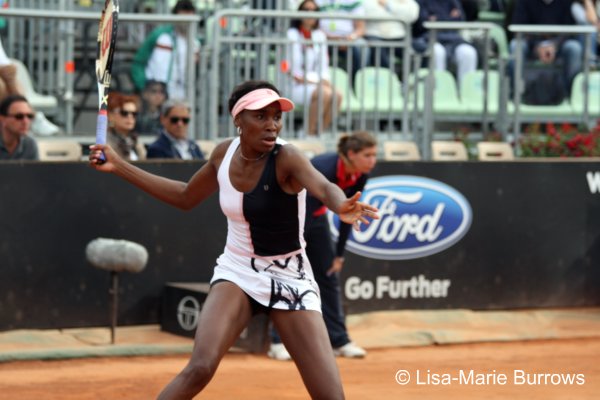 Internazionali BNL D’Italia, Rome – It was a mixed day of results for the Williams sisters in Rome. Serena Williams needed to play only four games before her opponent and home crowd favourite, Flavia Pennetta retired to due a right wrist injury and Venus Williams’ magnificent run came to an end today againstMaria Sharapova in straight sets 4-6, 3-6.

Serena Williams was on court barely more than half an hour today on Campo Centrale in front of an excited, largely Italian crowd when their excitement was silenced due to the injury of home country favourite Flavia Pennetta.

World No.21 Pennetta experienced difficulties from the start of the match and was broken immediately by the power ball game of Serena Williams and that there was little she could do about it. Pennetta requested assistance from the trainer and received medical time out to receive treatment to her wrist which was strapped up for support. The Italian star tried to soldier on so as not to disappoint the crowd, but unfortunately after suffering another break of serve, Pennetta was forced to retire. It was sad for the crowd, disappointing for Williams to win in this manner, but even more concerning for Flavia Pennetta who will be hoping for a quick recovery before Roland Garros commences.

Next up for Serena Williams, she will face No.8 seed Li Na after she defeated14th seed Cibulkova in her quarter finals match.

Serena Williams is aware of how physically fit Li Na is.

[quote]“Li Na is the defending French Open champion and she is a really good test to play against because she is such a good all-around player. She is just so fit.”[/quote]

Unfortunately for Serena’s big sister, Venus Williams there was no such luck as she was ousted in the quarter finals against her rival Maria Sharapova. Both players had met on six previous occasions and their head to head was tied at 3-3 until today.

It was always going to be a stern test for Venus Williams in her 7th quarter final appearance in Rome during eight visits and a good challenge of her form at present against the world No.2 Maria Sharapova.

Williams was the eldest lady left in the draw today and she certainly was not moving around the court as such! Wearing a new outfit today compared to early in the week, Williams tried her best to keep up with the power, pace and retrieval skills of Maria Sharapova, but it was to no avail, the current world No.63 could not sustain momentum for long enough and despite putting up a good fight, she was knocked out of the tournament in two straight sets.

On the bright side for the wildcard Venus Williams, she will now jump up the rankings to a projected No.52 after her run into the quarter finals in Rome.