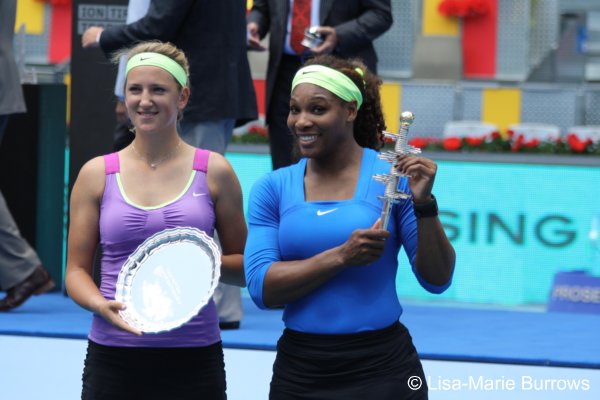 Mutua Madrid Open, Madrid – The new world No.6 Serena Williams stormed to victory against world No.1 Victoria Azarenka with a dominating 6-1, 6-3 victory that lasted only 64 minutes to win yet another title to add to her collection of 41.

Azarenka and Williams stepped out on court under the blazing sun and the two heavy-hitters of the WTA Tour lived up to their reputation, but it was Serena Williams who dominated rallies and was in full control from the onset.

The American hammered down 14 aces in the match, 41 in total during her five matches in Madrid this week and never really let Azarenka into the match. She broke her opening service game with scorching returns, which unnerved the Belarusian, as she then struck 3 double faults.

The second set did not see much of an improvement as the 13-time Grand Slam champion stepped up her game even more and offered few unforced errors.

Serena Williams needed only an hour and 4 minutes to lift the trophy and she was clearly delighted. On the stands Serena Williams held up her trophy and beamed from ear to ear and struck different poses with her prized possession.

The Mutua Madrid Open champion joked in the press conference about how she has handled the clay surface well this week, as have most of the WTA ladies on Tour in comparison to the men:

[quote]“Women are way tougher! You guys could never handle kids! We’re not going out there and being weenies!”[/quote]

Serena Williams still has her ranking at the forefront of her mind and as always she would love to get back to the top spot once again:

With Roland Garros a few weeks away, Williams would love to make a big impression at Rome and the French Open to continue climbing up the rankings, which she doesn’t attempting to do on clay:

[quote]“It’s a big myth, I love the clay. I have won the French Open. Actually, I like it more than the grass.”[/quote]

After her victory today, Williams has now won her 41st title match and recorded a 13-0 winning record on clay this season and as always will be a big threat at Rome this week.

Lisa-Marie Burrows is currently in Madrid covering the Mutua Madrid Open and will be at the Rome Masters next week. Catch her as a regular contributor on Twitter: @TennisNewsViews.