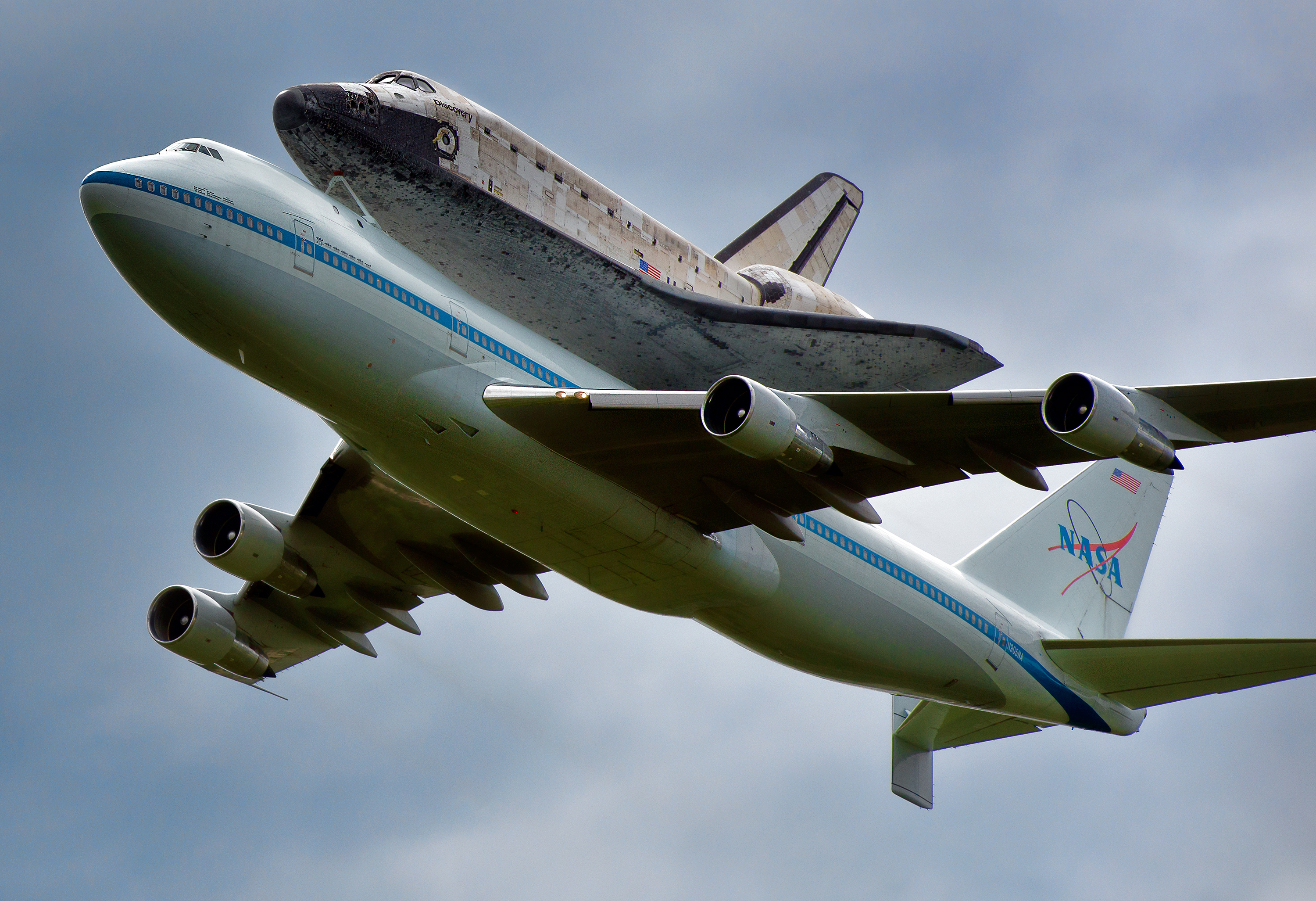 On April 17th, the Space Shuttle Discovery made its final journey.  This time it was from Cape Canaveral, Florida to the Smithsonian’s’ Air and Space Museum, Steven F. Udvar-Hazy Center  near Dulles International Airport in Virginia.  The Center will become Discovery‘s new home beginning April 19th.  The Discovery was piggybacked on a modified Boeing 747 jumbo jet, with an expected flight plan to take it just 1,500 feet over the monuments of the nation’s capital before landing at Dulles International Airport. Discovery is the first of the retired shuttles to be delivered to its final destination.

As late as April 16th, however, the exact flight path had not been released by NASA.  After much debate I decided that the best location to get really close-up shots of the shuttle would be near the landing site at Dulles Airport when it would be at its lowest altitude.  Touchdown was to be around 10:30 am.  In that the physical landing site was off-limits, I found the next best spot was the Smithsonian Air and Space Museum’s Udvar-Hazy Center.

I got up at 5am and took the 60 mile ride to be at the Udvar-Hazy Center by 7:30am.  I knew this would allow ample time to plan a shooting location, take some test shots and wait.  When I arrived, however, there were already cars in line, people claiming ‘their’ spot with chairs and blankets, news media trucks setting up their towers and camera tripods being set up everywhere.  By 8:20am the parking lot had already become full, the road closed off and thousands were positioned around the parking lot waiting to be part of history. It was good to plan ahead.

Knowing the large size of the plane and its expected low altitude, I selected my Nikon 70-200 VRII zoom lens as first choice to be used on my Nikon D800.  Counting on the Nikon D800’s amazing 36-megapixel sensor combined with this very sharp Nikon zoom  lens, I knew I had a good chance for making crops that would retain high image quality.

But, in case my estimates were wrong, and the Boeing 747 was even closer than expected, I brought along my Nikon D7000 with 17-55 f/2.8 lens as a backup.  I could then switch to whichever combination would give the best coverage quickly.  I took numerous test shots to be used as a baseline for image size and rough metering. I knew I would not have time for lens changes and the resetting of my camera once the shuttle was in sight.

I also knew that I will be shooting a moving subject with a very bright background (toward the sun).  I set my camera to ‘Manual’ used the following baseline:

Around 9:15am I noticed a number of helicopters appear at various locations nearby.  Standing on top of the museum’s observation deck were a group of people with binoculars.  Planes had not landed in a while although this is one of the world’s busiest international airports.  The shuttle, however, was not due to be at Dulles for at least another hour.  I  noticed that my cellphone suddenly had no service.  And then someone shouted, ‘There it is!’

A cold front had come through early in the morning, clouds had started to roll in and the winds had picked up. I overhead that, out of concern for the shuttle, the flight plans had been changed.  They were now to first take a test run to Dulles and then make a decision whether to go back and fly over Washington.  It only took about a minute from the time the shuttle first appeared, flew directly overhead and then disappeared again. It seemed to be flying at an altitude of about 500 feet at the time.  The site was truly amazing but it was over in a flash.  Everyone started to check their cameras to see if they had been able to catch this moment in history.  And, it still was not known whether Discovery was down and the journey over.

After about about ten minutes, I learned that Discovery was now over Washington and would make two passes around the city before its trip back to land at Dulles – we were going to have a second chance! Since the first pass was almost directly overhead where I had set up, I decided to relocate to gain more of a side view for the next pass.  A little after 10:15am I noticed more activity on the observation tower again and the helicopters where back – a good sign that we could be ready for the final approach for the actual landing of Discovery.

As the Boeing 747’s headlights suddenly appeared in the distance on its approach, I noticed this time it was further to the side of my position – my new location was going to be great.  Thousands started cheering and applauding as it approached.  Then, as quickly as it appeared, it soared past, and disappeared.  As quick as this was, this was absolutely breath-taking and truly an historic moment to be remembered. People started packing up their things and some made their way back to their cars.  As I was walking to the museum for a brief visit, I started to look at my last few photos.

In my excitement in viewing the last flyover, I had not noticed that the landing gear had not been deployed. I looked up at the observation tower and the people were still there with binoculars.  Discovery had not yet landed!  There was going to be a third flyover.

I quickly ran back to find a clearing where I could set up again – and there it was, the Boeing 747 near treetop height with landing gear extended making its final approach.  NASA’s T-38 jet escort was just to its side.  I was now witnessing the last seconds of Discovery’s twenty-two year service.  All of a sudden everyone began to cheer  in excitement and appreciation again – but much louder than before, nearly drowning out the sound of the jet’s engines.  What an historic and emotional moment indeed.   The journey was over and Discovery was down.  What an experience – what a memory.

Festivities will begin at the Steven F. Udvar-Hazy Center on April 19th when Discovery will be rolled into the museum’s hanger to replace the existing mockup of the Shuttle Enterprise.  On hand will be the Discovery crew members, including space pioneer John Glenn, who returned to space in 1998 aboard the spacecraft at age 77.

The Enterprise will be flown piggyback as well to John F. Kennedy International Airport in New York and moved by barge to the Intrepid museum in Manhattan.