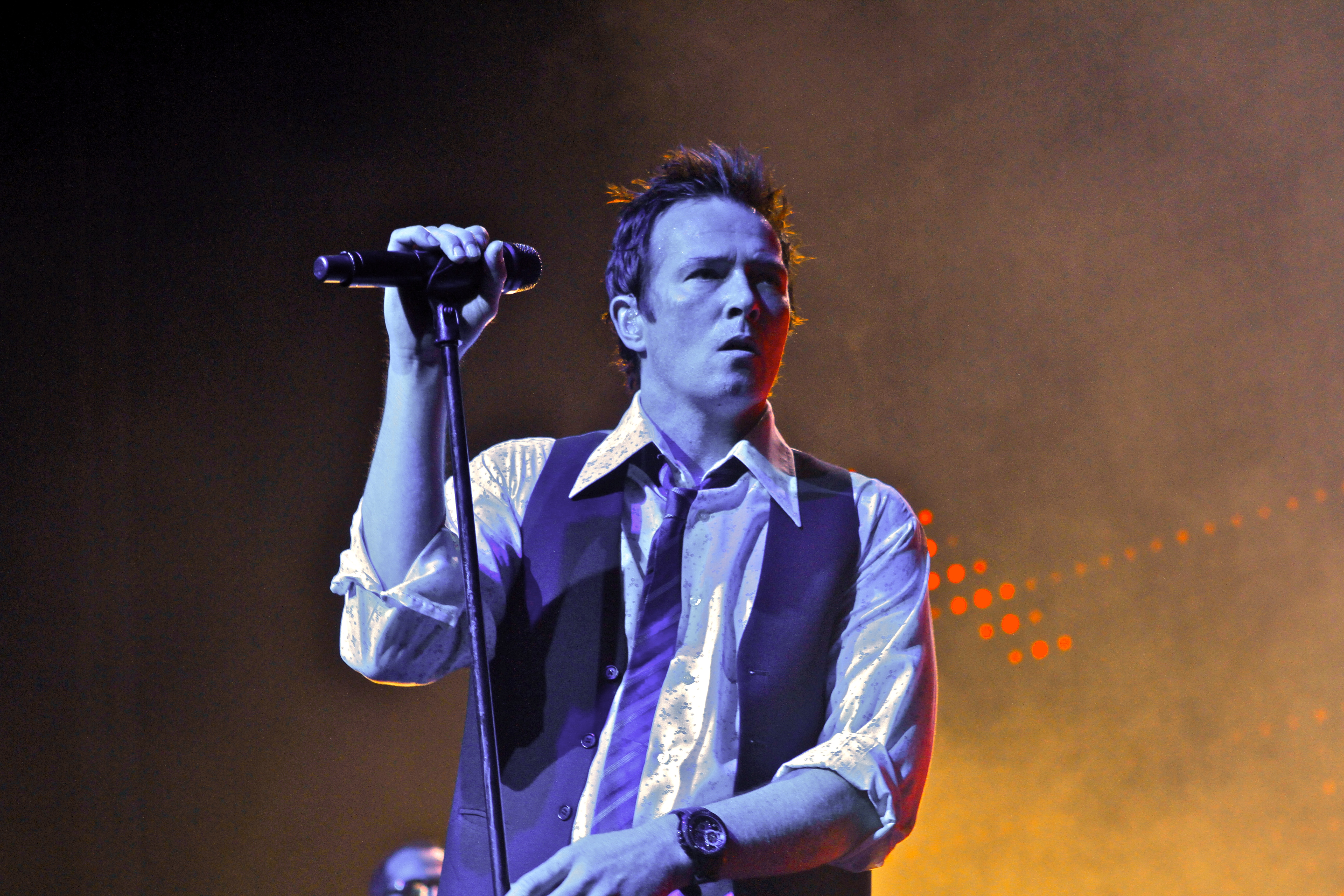 [dropcap]T[/dropcap]he last time I saw the Stone Temple Pilots was in the summer of 2000.  They were a band at the top of their game headlining the HFStival in DC with Rage Against the Machine for over 90,000 people.   I remember how hot that July day was and how the sea of thousands of young teenagers and college kids were happily drunk with sweat and booze.  Until after waiting all day in the heat through hours of various acts, the Blue Man group’s tired antics ended the crowd’s patience.   Shouting “STP & RAGE” over and again the crowd was restless but also ripe for some real rock.  Pelting the Blue Men with soda and pretzels until finally the main acts, Rage and STP, appeared at dusk.  Both performances were outstanding.  Front men, Scott Weiland of STP and Rage’s Zack de la Rocha each held the football stadium show’s attendees in the palm of their hands. 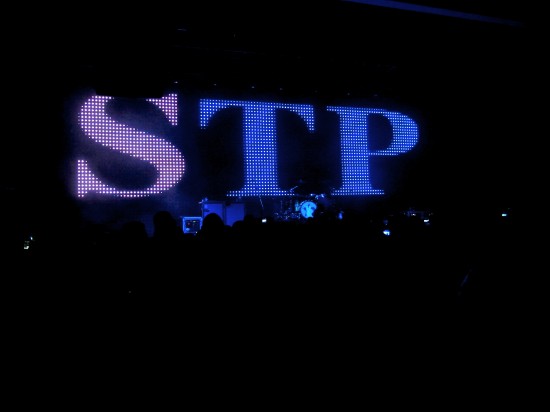 It seemed these were the bands that would carry the torch of guitar driven heavy Rock & Roll into the future. However, within three years, both bands would be broken up. This was especially surprising for STP since they were one of the most commercially successful rock bands of the 1990s.  STP sold approximately 40 million records in the decade, had 16 top ten singles, eight #1 hits, including one #1 album, Purple in 1994 and even won a Grammy for “Best Hard Rock Performance” for the song “Plush.”  Sadly, with STP’s massive fame, also came the classic Rock and Roll problems.  Instead of music, the coming years saw the band consistently make news with issues involving drug addictions, arrests, rehab stints and law suits, most notably involving lead singer, Scott Weiland.  The members of STP would not only eventually break up but also go on to form different splinter “Super” groups Velvet Revolver (Weiland) and Army of Anyone (DeLeo Bros). Involved with different projects and sometimes, not speaking, the members of STP would not consistently tour for almost a decade. The music world’s thought was that STP was strictly in the past. 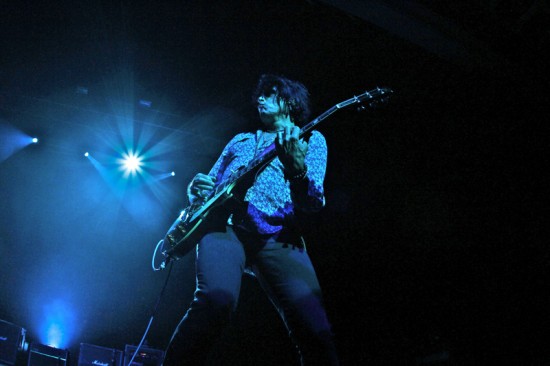 However, in 2010 the boys of STP found themselves free of addictions, lawsuits, arguments and outside musical projects.  They decided to see if the magic was still there and released a new album.  Possibly a significant sign of unification, the CD is simply titled the bands’ name: Stone Temple Pilots  In the 90’s STP was arguably the hardest rocking of the new age of grunge bands because they weren’t truly grunge. Unlike many of the other bands at the time, they weren’t from Seattle and their sound wasn’t dreary. The DeLeo brothers were from New Jersey and met Weiland in California.  Their licks and hooks were classic rock driven with an edge towards metal and yet had melodic breaks towards jazz that made their sound and song writing acceptable to head bangers and classic rockers alike.  They were the Led Zeppelin of the Generation X age.  This was proven when their cover of Led Zep’s Dancing Days was the biggest hit off the 1995 Zeppelin tribute album Encomium which featured top acts of the time like Sheryl Crow, Blind Melon, Cracker and Hootie & the Blowfish.  Could STP still match their former power, this second time around?    I wanted to see if the magic was still there too. 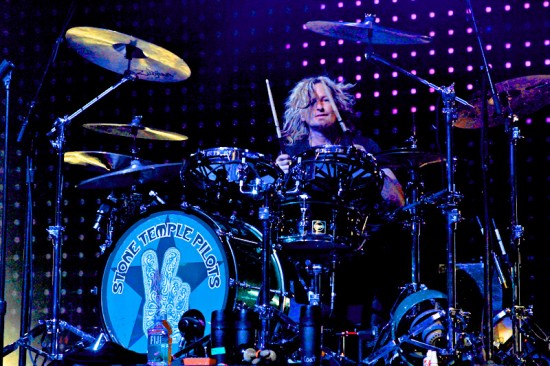 A decade later, for a much different crowd and in a much different setting, at the Borgata Casino in Atlantic City, I was able to observe STP yet again.  On a summer shore weekend holiday, arriving late and little older but dressed a little better, mid 30 and 40 something’s entered the Borgata’s make shift arena.  Seating a tight but ready 3,000 persons, it didn’t take long for them to be transported back to their youth.  STP left no doubt they were back and with a vengeance.  The first song was the hard hitting, Crackerman, off their debut CD, Core.  Immediately, the crowd was up.  Weiland, dressed in a vest and tie showed he was all business.  He moved with ease and flaunted his trademark bullhorn.  The DeLeo Bros held the rhythm and Kretz’s drumming pushed the beat into the people. Hit after hit, the band kept coming: Wicked Garden, Vasoline, Big Empty, Plush, Interstate Love Song, Big Bang Baby, Sex Type Thing and more. 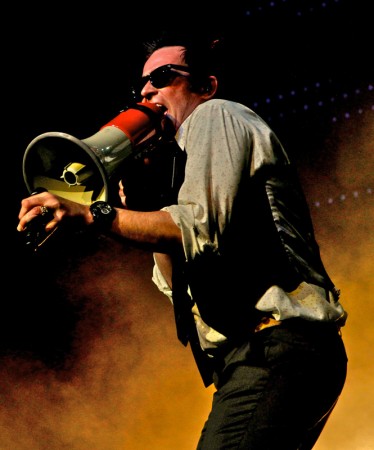 They would not let up. No clunkers or tryout tunes.  They just played hits.  A thank you from the DeLeo brothers about being back in NJ and brief statement from Weiland about how the song Plush put them on the map were noted to the fans approval. However it was purely the music that made the moment.  Weiland’s vocals were spot on.  His voice is still in prime shape hitting high and low notes as he pleases. And the band is still sharp.  Too often under-rated, Eric Kretz really makes distinctive drum parts for the STP songs which the DeLeo brother’s ride on a Rock n Roll blanket of heavy bass and guitar.  They left the stage to a standing ovation before the encores upon where Weiland let a lucky fan blow the bull horn to the opening charge of Dead and Bloated: “I AM SMELLING LIKE A ROSE ON MY BIRTHDAY DEATHBED!”  The crowd went nuts.

I began thinking about that summer day in Washington, D.C., 10 years ago and how fortunate it is not only to have STP back and playing live but being alive at all.  It occurred to me what a loss to music it was when they broke up because their later incarnations of Velvet Revolver and Army of Anyone were ok but simply didn’t have the magic of Scott Weiland, Eric Kretz, Robert and Dean Deleo’s chemistry.   Unfortunately chemistry of a different kind kills so many talented bands and artists.   When drug abuse 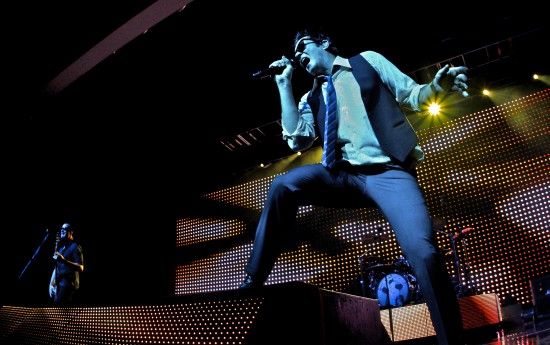 leads to so many problems, arrests, rehab stints etc. any hopes for reunion, or redemption are too often ruined. Thus, the music world is lucky that ultimately STP is getting a second chance. The last song of the night was Trippin’ on a Hole in a Paper Heart. The lyrics in this song,  “I’m not dead and not for sale” were never so true.  STP is not dead. They are born again. And although their songs sell, their sound has never been for sale. They have never tried to morph into a certain style of the moment. From their highs to lows they have never stopped being simply, an up front rock band and if you get too close they will show you by shoving classic Rock and Roll right in your face.   STP is back in business.