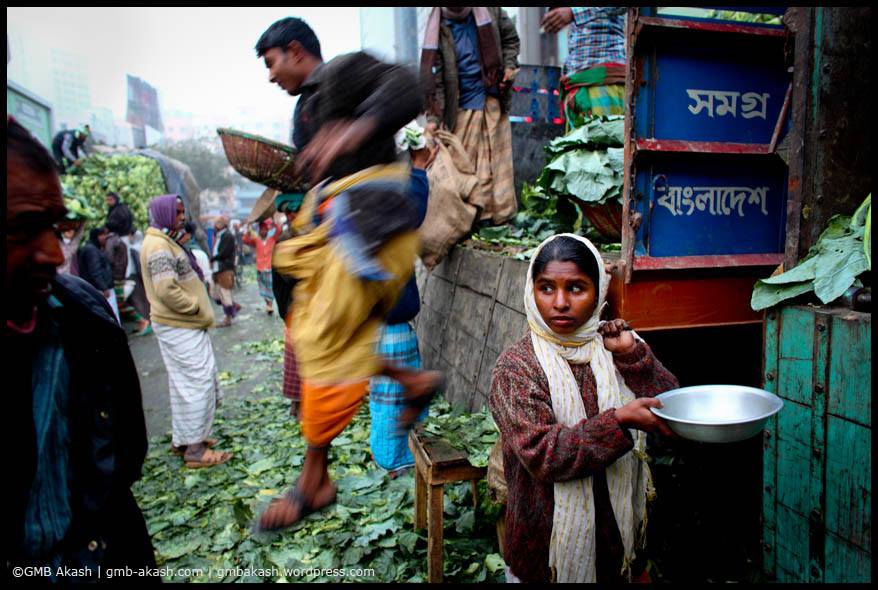 [box_light]About the Workshop by founder of First Light Institute of Photography, GMB Akash[/box_light]


“Like an onion, cities are made up of many layers.  At first glance it is only complexity and chaos.  Only when one stops to concentrate on a single “layer” of the “whole,” does the character and “truth” of that layer begin to take focus.  This is what this 4-day (two weekend) workshop is all about – turning your lens and creativity on just one component part – or “theme” (specific subject or situation), that adds to the bustling social and technological sphere that is Dhaka, Bangladesh.

Designed for beginners and advanced photographers alike, this workshop will consist of both classroom instruction and discussion, as well as practical one-on-one help when and where it is needed during our week in the field.  The goal of this workshop will be to not only produce a short, defining narrative of your chosen city theme, but do it in a way that is content-rich, creative and moving.” – GMB Akash

Only 20 hard working students will be admitted for each session. Students will be granted admission to the workshop based on email confirmation. Therefore interested participants are requested to email akashimages@gmail.com or call 01989052484

Registration is open until 1st March 2014.


David Bathgate studied anthropology and journalism at the Pennsylvania State University in the U.S., earning a doctorate and master’s degree, respectively, in those two disciplines. Subsequently, university teaching and visual journalism followed as parallel career pursuits. First photographing and writing for local magazines and newspapers, David eventually took his co-careers to Australia and worked on photographic projects in Indonesia and Southeast Asia. In 1993 he closed the door on academia to become a full-time visual storyteller, covering social and environmental topics, worldwide.

David Bathgate is represented by Corbis Images and works regularly in Asia and the Middle East, as well as in Europe, for publications such as Time, Newsweek, The New York Times, Geo, Stern, Spiegel, Focus and The London Sunday Times Magazine. David Bathgate is the Founder and President of the online-interactive photography and multimedia school, The Compelling Image David also serves in the editorial committee of the on-line photo documentary magazine Photojournale. He is the featured photographer at the Fuji X- Photographer’s gallery.

To read his interview and to get some of his photography advice visit: http://wp.me/p7TFU-4P


GMBs passion for photography began in 1996. As a multimedia Journalist GMB has traveled intensively in 25 countries and received more than 80 international awards. In 2002 he became the first Bangladeshi to be selected for the World Press Photo Joop Swart Masterclass in the Netherlands. His work has been featured in over 90 major international publications including: National Geographic, Vogue, Time, The New York Times, International Herald Tribune, The Sunday Times, Newsweek, Geo, Stern, Der Spiegel, The Fader, Brand Ein, The Guardian, Marie Claire, Colors, The Economist, The New Internationalist, Kontinente, Amnesty Journal, Courier International, PDN, Die Zeit, Days Japan, Hello, and Sunday Telegraph of London.

GMB Akash uses his talent, his perseverance and his camera to communicate through the extraordinary images he takes: those injustices that most people do not want to acknowledge. More than a photojournalist, GMB Akash goes much further than simply informing and provoking societies with his exceptional photographic gift. He takes concrete action to improve the lives of the impoverished and the abused. This is his life mission. He speaks for the voiceless through his photography and two published photography books as well as spreads the word of the situation of the poor and uneducated at many conferences to which he has been invited around the world.

GMB Akash was one of the speakers at the 5th Global Investigative Journalism Conference in 2008, held at Lillehammer, Norway. He was the first Bangladeshi photographer to be invited to TED Talks and spoke at TEDxOporto 2011, in Portugal. In 2012 he was one of the speakers at the 7th Annual Forum of Emerging Leaders in Asian Journalism, in Yogyakarta, Indonesia. He presented his 10 year long project resulting in his second book ‘Survivors’ on Dutch television partnering with UNICEF for the production UNICEF NIGHT in 2012. In Hamburg, Germany he was one of the key note speakers at The Power of Pictures in March 2013 and panelist together with Jens Schröder, Vice Editor in Chief of the magazine GEO and Wolfgang Krach (Süddeutsche Zeitung).Webster University in Geneva invited him to speak and participate at their international 3-day MEDIA TRENDS 2013. In addition to his solo exhibition, ‘Survivors’ held twice in 2013 until 2014 in Lugano, GMB Akash was the co-guest speaker along with Swiss photographer, René Burri at the photography festival, LuganoPhotoDays in Lugano, Switzerland.

For further detailed information about the workshop: firstlightphotoschool.com/2014/01/21/making-photo-essays-of-the-street-with-david-bathgate-and-gmb-akash-2/