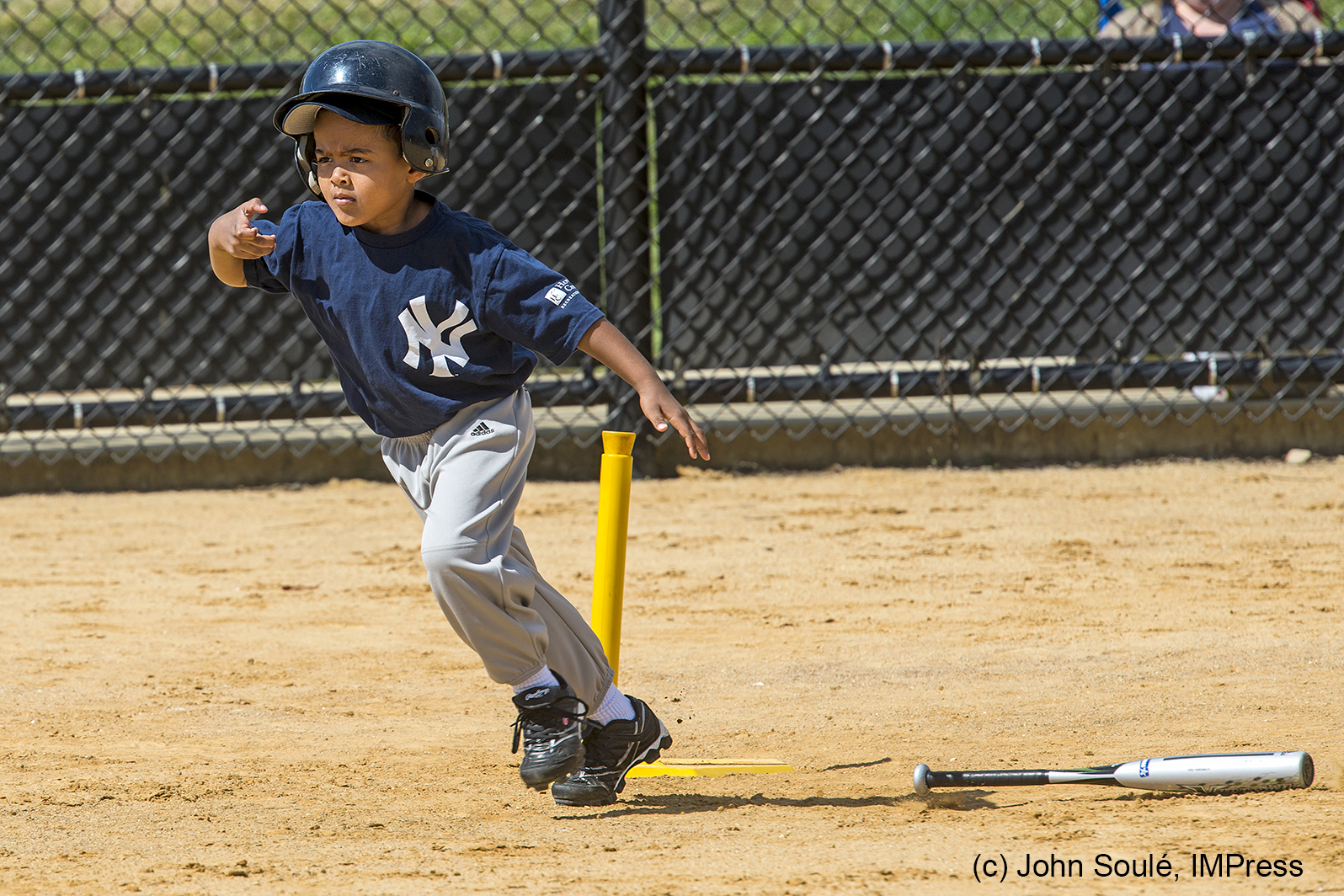 It’s Fall, leaves are starting to change color and there is a refreshing chill in the air.  But the baseball season, (often considered America’s pastime), is heating things up. Teams are now battling in final competitions to determine who will be the next World Series Champions.  I recently covered games between the Yankees and the Nationals and then the Yankees and the Orioles.  But the players were under 6 years old!  This was the game of T-Ball and the location was not in a stadium but in a recreational park.

The basics of baseball, from youth baseball through the Major Leagues, is the same in T-Ball.  In fact, many professionals started learning the game of baseball by playing T-Ball when they were children themselves.  This is a brief article on that sport.

The purpose of T-Ball (or Tee Ball) is to teach children, from 4 to 6 years of age, the game of baseball by taking away the fear of the pitched ball.  Most importantly, T-Ball is intended to teach and develop basic skills while having fun. Unlike baseball, however, the game is non-competitive.

T-Ball has proven to be a natural transition into standard baseball and softball as it provides young players with the basic skills and an enthusiasm needed for these sports.

A “Tee Ball” trademark was registered with the United States government in the early 1970s, but the game’s origins date back to at least the 1940s and 50s with several people claiming to be the father of the game.  Although the name “Tee Ball” is a registered trademark, T-Ball is the generic name and is often used interchangeably with Tee Ball.

Today T-Ball is played in every state and territory and has spread to various countries around the world. Every US president since Ronald Reagan has hosted T-Ball games on the South Lawn of the White House.

T-Ball is currently estimated to have over 2.2 million players, 65% boys and 35% girls from the18+ million families with children of T-Ball.  And, this number does not include all the administrative staff, coaches and volunteers that are involved to make this happen.

T-Ball is one of the first team sports for most children and draws a high level of adult support and enthusiasm. Many parents assist during the game by coaching the players in the dugout, in the field, on the bases, and while at the plate. When a team is at bat, the coach of the batting team serves as umpire behind the plate. The coach is able to direct the batter as well as assist with the opposing team’s catcher.

Assistant coaches stand in the field to instruct and encourage the players during the game. And at times, coaches need to have a player or two focus back on the game rather than the glorious dirt that makes up the infield.

Spectators cheer and shout encouragement as batters swing, run around the bases and fielders try to catch and throw the ball.  The parent-player interaction becomes a strong factor in the support of the children and the building of confidence as skills are being developed. 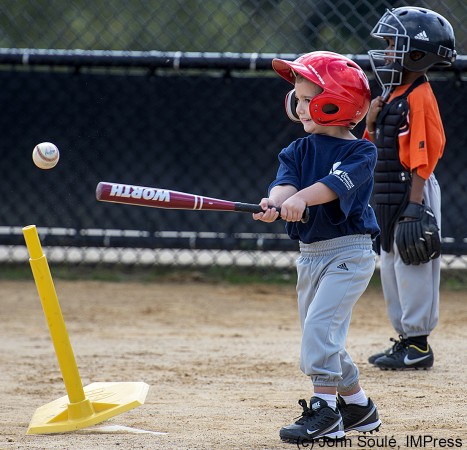 Each batter comes to the plate wearing a batting helmet (at times covering most of their head).  Their job is to hit the ball and run to the correct base.  The batting order is changed each inning so no child bats in the same order.  All players on a team bat once each inning.  Every batter makes a single (unless the ball goes over the infield – then it is a double.)  Some batters have a very interesting approach.  Close your eyes and swing like it is a piñata.  And surprisingly – it works for some really well. 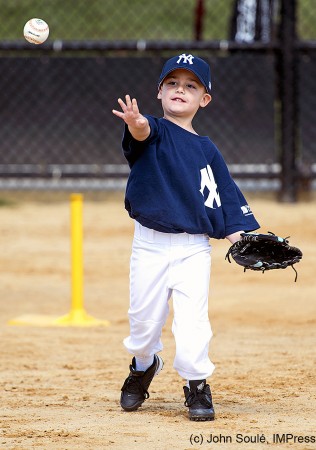 Unlike in standard baseball, the pitcher does not actually pitch the ball but occupies this position as an infield player only.  Infielders learn the proper form of catching and throwing the ball and working as a team.

The position of catcher seems to be the most sought after position.  Children enjoy wearing the special equipment. They do not use a catcher’s mitt, but use their own glove.

All children play on the field each inning. At times when the ball is hit, a swarm of infield players scramble after it.  While some seem to have their mind on something entirely different, like perhaps drawing in the dirt.  It is always a very amusing scene indeed.

A T-Ball game consists of 3 full innings, or one and one-half hours, whichever occurs first.  An adjustable stand or tee is placed on top of home plate.  The ball is then placed on top of the tee, (by the catcher), for the batter to strike.

The ball that is used is the size of a regular baseball but much softer.  This makes for an easy transition to softball for girls and baseball for boys as they get older – and does not hurt as much as the regular baseball would.

All batters run around the bases, whether called out or not. Only ‘singles’ are allowed to advance the runners.  A ‘double’ is allowed if the ball is hit over the infield on the fly.

When the last batter hits the ball, each of the runners run around all of the bases to home plate – essentially a homerun is hit each inning.

During the season (about 10 games), each child plays a variety of field positions for an equal amount of innings.

Most of the rules are similar or identical to those of baseball, though the game is played on a smaller field and score is not kept. T-Ball rules are designed to maximize participation: an inning is completed once each child has had a turn at bat and all extra players of the defensive team play in the outfield every inning. To encourage the defensive team to try to make plays, there are typically no extra bases on overthrows and runners may not advance after the ball is in possession of an infielder. 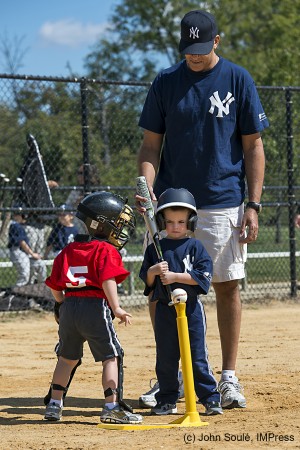 There is no pitcher – but there is a catcher who’s job it is to place the ball on the tee while the coach restrains the bat so an anxious batter doesn’t crown the catcher. 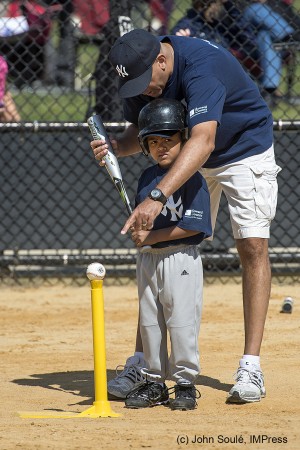 The batter is to keep his eye on the ball… 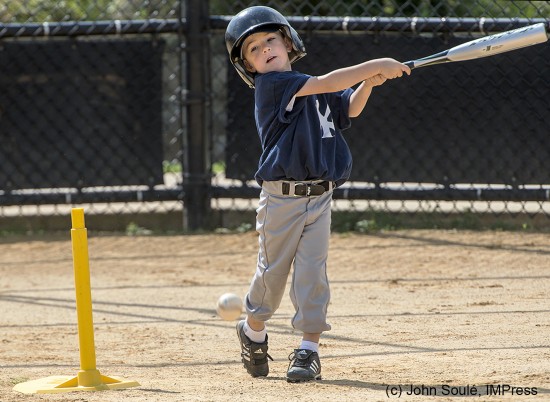 and follow through with the swing showing good form … 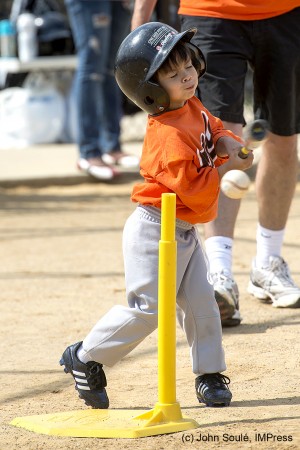 or keep your eyes closed the entire time.  Whatever works best… 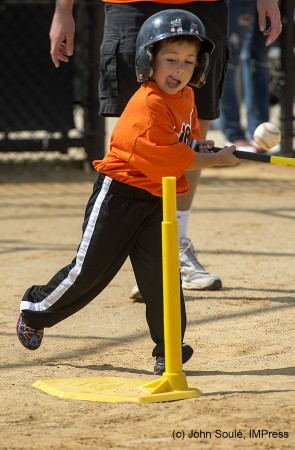 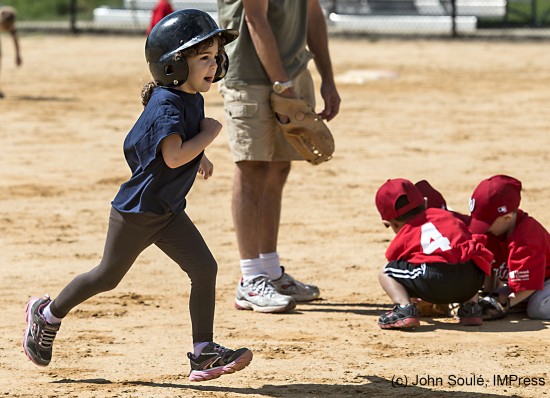 After you hit the ball, run to base as the other team tries to figure out who gets to touch the ball first… 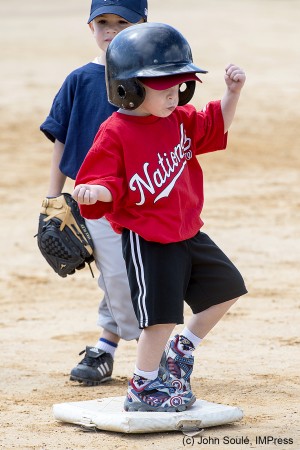 After sixty plus years, these were the first T-Ball games I had the pleasure of attending.  I was quite surprised to witness some of the skills that were being demonstrated by these young children. I was able to see, firsthand, how T-Ball helps prepare children for team play and help teach techniques that can become the foundation for future champions.

My hat goes off to the coaches – this takes a lot of work and a lot of patience.  This is one game when there are truly no losers.  I highly recommend this activity for families with young children.