Tips for Shooting a Day in the Big Apple

Len Rapoport has had the storied life you usually read about in “Rolling Stone.” The New Jersey photographer joined the National Guard at age 17, then got his first big break as his cousin Neil Diamond’s first photographer. “I was into photography when I was 9 years old and learned how to process film and prints in the Army,” he says. “In the mid-1960s, Neil came to me and asked if I would shoot his first album cover and then do some other shots that he could use for publicity photos. They ended up using these photos for four or five album covers, sheet music, concert books, and more. These early black-and-white photos have been recognized as the iconic shots of Neil as a young singer.”

From there, Len’s career included owning an employment agency, becoming a pioneer for women’s large-sized sportswear in the women’s apparel business (where he worked side by side with Perry Ellis), and creating MovieTee’s, a business that manufactured licensed movie apparel sold to the major video distributors and video stores. Today Len is president of International Press Association, which he founded 22 years ago.

“IPA is a labor of love for me — it’s a way to utilize all of my talents, including my writing, corporate communications, marketing, and photography skills,” Len says. “If you join IPA, you have an opportunity to ‘Learn by Doing,’ the IPA mantra. Each IPA member obtains commercial and professional experience shooting events that he or she would never have access to otherwise. Each member also has a professional profile on the site and receives a complete press ID kit that identifies them as being with IPA, gives them important media access, and maybe even offers an opportunity to join the best IPA members at IMPress, the organization’s new online magazine, as part of the staff.” 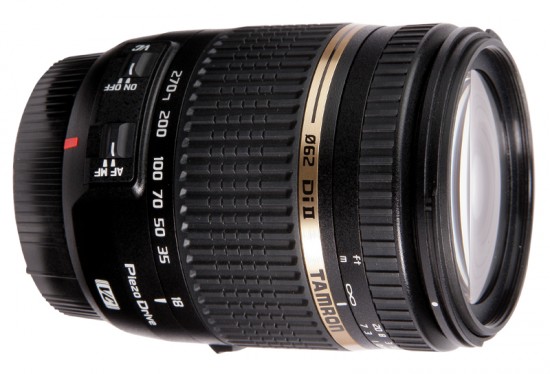 Rapoport recently added the Tamron 18-270mm VC PZD lens to his shooting arsenal, which opened up a world of new photographic opportunities for him [see his full review of the 18-270 here]. “I love that the lens is lightweight, which makes it easy to carry,” he says. “I also love the huge range. I can get those great wide-angle shots at the 18mm end (the 35mm equivalent of around 28mm), then have a nice telephoto shot at the 270mm end. You can see that tremendous range in the images I took from the rooftop of the Metropolitan Museum of Art, including the photo of a building from the roof of the museum. It had to be at least a half mile away, and you can barely see the building above the tree line. Then I took the second shot at 270mm, capturing the same building. The Vibration Compensation (VC) and the quality of the lens kept the images sharp, crisp, and clear.”

Read on for Rapoport’s tips for capturing a day in Manhattan with the 18-270, as well as what else he’s using the lens for in his photographic forays.

Create HDR images to show a place in a (literally) different light.

I went to Central Park while I was in the city and shot some HDR images. To do this, you shoot three images at different exposures. The first one you do is right on the button, perfectly exposed the way it should be. The next one is one stop overexposed (if there are any dark portions in the image, they’re going to be lighter), and the third one is one stop underexposed (which will pick up all the light stuff, like the sky and the clouds, that usually get burned out). Then you simply bring them into whatever computer software you’re using, combine the three images together, and manipulate the image to get it the way you want it to look. [For more info on this technique, read IPA’s guide to shooting HDR images.]

My “View From Central Park” shot was three exposures taken on a tripod on an overcast day — it actually began to rain while I was shooting. I was able to salvage the images using specialized software that combines them and allows for adjustments to get the final image. You get these spectacular shots that almost don’t look like photos. Some people don’t like HDR for that reason, because they say, “That’s not photography anymore, it’s art.” But photography is art!

Previsualize your shots, then bring them to life.

I saw a line of cabs outside of the Met and knew what I wanted before I took the shot. When you shoot with a telephoto lens, it compresses the subject matter, as it did here with the cabs. We also use this technique quite a bit when shooting fashion: You shoot from 20 feet away, or further, from the model with a telephoto lens, which then compresses the background into the shot, and you end up with a nice, sharp image of the subject and beautiful bokeh in the background.

For some interesting-looking sculptures inside the museum, I only took one shot. In this photo, the light was natural and warm, as you can see in the image. It’s all in the composition and your eye: You need to know what you want when you see it and before you press the shutter button. If someone else had taken that shot, it would have likely come out differently. It’s like people in an art class: Each one paints or draws the subject as he sees it, and each one looks different.

Look for unusual compositions to show places in a new light.

I often tilt the camera, as I did in one image while driving down 5th Avenue. It gives you a shot that has some movement or style to it. That’s a technique I do quite often when shooting models or people, too. In this case, I saw the scene in front of me and was at a red light, so I stuck my neck out of the window while stopped and took the shot.

I always like to frame my photos, which I try to do by including the branches of a tree or other objects. I took a shot of the main entrance to the Met from across the street as we were walking to the museum. Then I walked down the block and took a couple of additional shots, making sure I had the green leaves of the tree in there. 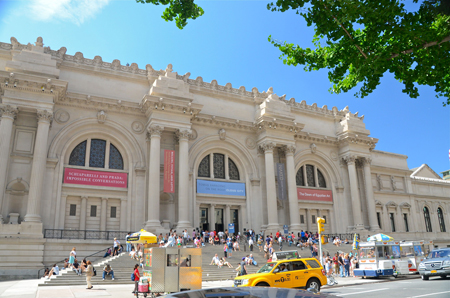 Even if you’re just shooting in your own neighborhood, be like a tourist in New York for the first time: Look up as you walk down the street or around a popular landmark. I do this with my camera around my neck, and I’m sure people think I’m a tourist, too! I did one of my shots of a skylight in the Met by looking up as I toured the museum. You’d be surprised how many great shots you can get that way.

I also like to create panoramics with the 18-270, like the ones I took from the roof of the Met. With this lens and the VC, you can create some spectacular panoramic shots, even handheld. You take three to six shots, depending on the expanse of the image you want, then merge them in Photoshop or other programs. [Check out Len’s recent article in IMPress on making panoramic images with the 18-270.

In the past, I did very little video with my cameras. Now I’m shooting more video and encouraging our members to do the same [see some of Len’s video work on his YouTube channel]. I cover many major trade shows, such as the International Beauty Show or the PDN PhotoPlus Show in New York City. I shoot my video with the 18-270 and also use my Tamron 10-24mm zoom while interviewing exhibitors at these shows.

I use the 18-270mm lens for my travel articles, too. You can see the results I achieved with this lens on my video tour of the Holland America Line’s largest and newest cruise ship, the Nieuw Amsterdam. I also just covered the Quick Chek 30th Anniversary Balloon Festival in Readington, New Jersey, which included a performance by Poison singer Bret Michaels. It was a blast — using the 18-270mm lens enabled me to capture all the action in stunning detail.

Some of the newest DSLR cameras now have great audio capabilities included. In previous models, you didn’t have the ability to monitor the audio and needed an additional device to do so. Now you don’t need anything else to monitor the audio, so shooting HD video is easier than ever before. On-camera LED lighting is really a must if shooting video. A good unidirectional or shotgun mic is also essential when shooting in noisy environments. Some of the microphone companies are really doing a terrific job of providing these on-camera microphones for DSLR photographers-turned-videographers.

It’s a different discipline and a tremendous learning process to be a still photographer and learn to be a videographer. But if you’re a journalist, photojournalist, or photographer, you should learn at least the simple video techniques. I don’t even need to make these big, elaborate movies — I just want something I can upload to YouTube and easily embed in the articles I write. After all, if a picture is worth a thousand words, what’s a well-shot video with the 18-270 worth?

Click through to check out more of Len Rapoport’s photos or IMPress articles or to subscribe to his Facebook feed. To learn more about IPA, go to http://internationalpress.com/index.php?file=benefits, the IPA Member Support blog, or the IPA’snetworking sites.