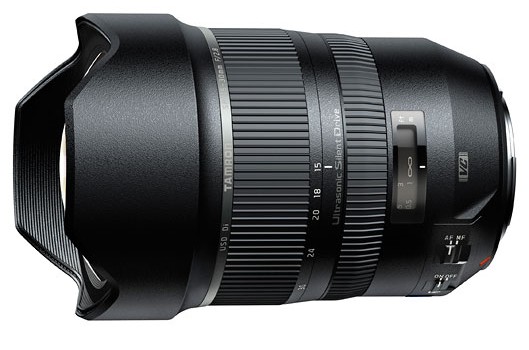 September 12, 2014, Saitama, Japan. – Tamron Co., Ltd. (President & CEO: Morio Ono), a leading manufacturer of precision optics, announces development of a new ultra-wideangle zoom lens for full-frame DSLR cameras with a fast F/2.8 aperture and VC (Vibration Compensation), the world’s first in its category. The price and launch date are to be determined. The lens will be showcased at the Tamron booth at Photokina 2014, September 16- 21, 2014 in Cologne, Germany (Photokina Booth Number: Hall 4.2 D10 – E19).

Since 2012, Tamron has been expanding its lineup of interchangeable lenses for 35mm full-frame DSLR cameras. SP 24-70mm F/2.8 was the first in the series, being integrated with VC, followed by the 70-200mm F/2.8, 90mm F/2.8 Macro, and 150-600mm F/5-6.3. The array of those new lenses have been highly acclaimed among the photo enthusiasts and working pros around the globe. To address the needs for more towards the wider angular field, Tamron spearheaded the development of SP 15-30mm F/2.8 Di VC USD, a fast ultra-wideangle zoom lens with the image stabilization feature, setting itself apart from the rest of zooms in this category.

With an optical construction of 18 elements in 13 groups, inclusive of XGM (eXpanded Glass Molded Aspherical) element placed at the front group and several LD (Low Dispersion) glass elements in the system, aberrations such as geometrical distortion and lateral color are efficiently compensated for enabling the zoom lens to deliver outstanding image quality throughout the entire range from corner to corner.

Recognizing the needs for image stabilization capability on a wideangle lens voiced by a number of photographers, especially for a full-frame, fast F/2.8 ultra-wide-angle zoom lens category, VC is tuned for providing discernible competence throughout the entire zoom range. The feature enhances image depicting capabilities for shooting night scenes and under low light conditions.

Natural and smooth blur on the subject background enhances depictive capabilities of wide-angle photography when a subject is located in the close distance. The 9-blade diaphragm construction retains a near-circular aperture opening even when stopped down by two steps from its full open position and delivers ideal bokeh effects.

Speed of autofocus and control accuracy are further improved. USD (Ultrasonic Silent Drive) delivers tack-sharp images due to the high torque and fast response speed with least amount of lag time, yet with extremely low acoustic noise. Equipped with a full-time manual focus mechanism, fine focus adjustments are enabled without exiting from the AF mode.

The SILKYPIX Developer Studio software provides an added feature to generate high-quality images from RAW data, while performing adjustments to reflect a personal style and a taste of the photographer. These include white balance, color, sharpness, and the tonal curves recorded by digital cameras.

The SILKYPIX Developer Studio for Tamron provides a range of functions, in addition to the basic adjustment capabilities, such as correcting aberrations (lateral color, distortion, relative illumination fall-off) referring to the optical design data. Optimal use with Tamron’s SP series lenses – renowned for their high-depiction capabilities – delivers images that meet photographers’ most exacting demands.

VC (Vibration Compensation) is Tamron’s proprietary image stabilization system. Tamron’s VC is a three-coil system, whereby three driving coils activate the shake-compensating VC lens group electromagnetically via three ceramic ball bearings. The VC lens elements are held in place only by contact with the ceramic ball bearings, achieving smooth movement with little friction. And since the VC mechanism is moved in parallel using only the motorized control, the mechanical structure has been simplified, enabling the development of a more compact lens.

eBAND Coating, developed by Tamron, is a new coating technique that radically improves anti-reflection properties. A nano-structured layer (1nm = 1/1,000,000mm), with dimensions smaller than the wavelengths of visible rays of light, is deployed on top of multiple coating layers to maximize efficiency.

Reflections occur at the interface between the lens and the air because of the difference in refractive indices of the two substances. The nano-structure of the eBAND Coating renders an extremely low refractive index by minimizing the differential with that of air while actively inducing air to its own structure, thus significantly suppressing the extent and degree of reflections.

In addition, a total anti-reflection efficiency at the lens surface is further improved by means of integrating the conventional coating technique based on an active utilization of the “interference of light” principle, attenuating an amount of reflections by overlaying reflected light on the coating front surface and that of the back side with its phase shifted, thus increasing the net transmissivity.

Outstanding anti-reflection performance across nearly the entire range of visible rays can be obtained.

Particularly, the performance is highly evident for substantially angulated incident light, which has been a major challenge for conventional coating techniques.

“Extended Angular Dependency” refers to superb anti-reflection properties relative to angulated rays of incident light rendered by improvement of coating characteristics to expand the receptive angles of the incident light.

“New Eyes for Industry” is Tamron’s philosophy. This creed is consistent with the company’s position as a comprehensive manufacturer of a wide range of original optical products, from interchangeable lenses for SLR cameras to various optical devices for both the general consumer and OEM. Tamron makes optical products that contribute to a range of different industries and will continue to devote its rich creativity and leading-edge technical prowess to various industrial fields. Furthermore, Tamron is fully aware of its responsibility to the environment and aspires to help preserve the natural environment in all of its business activities. Among its many optical and mechanical innovations since the founding of the company in 1950, Tamron’s development of mass-produced hybrid Aspherical elements paved the way for today’s compact high power All-In-One™ lenses when, in 1992, this technology was incorporated into the ground-breaking 28-200mm. Tamron continues to lead in this category of lenses with the 18-270mm Di II VC PZD — the world’s smallest and lightest 15X All-In-One™ zoom lens featuring Tamron’s proprietary VC (Vibration Compensation) system for blur-free hand-held shooting of photos in low light and at telephoto settings and PZD (Piezo Drive) autofocus system for fast and quiet autofocus operation. Tamron’s recent SP (Super performance) lens introductions have received accolades and high praise from leading photographic magazines and websites for their outstanding best-in-class performance. Tamron has garnered international acclaim for its extensive line-up of professional and consumer lenses.