[dropcap]T[/dropcap]he starting “gate” rose up and the dozen brown, one-humped dromedary camels jerked forward as a pack. Shouting handlers darted behind them a short distance encouraging them to run faster. A truck with a mounted camera sped off in advance while a sea of white Land Cruisers accelerated alongside the sand track. This camel race was in full swing.

Interestingly, the galloping animals do not like to be alone. Once out of the gate, they instinctively weaved to either side of the rails and those camels that began running down the middle of the track quickly drifted to one side or the other to remain a part of the pack.

The camel owners, I learned, had remote control transmitters in their vehicles and pushed their camels on by either talking to them and/or activating the robot on their backs. The owners stayed with them the entire race, which today featured six km (3.7 miles).

This being my first experience observing camels racing, I assumed that it would be very similar to horse racing. In some respects, it is, but in other aspects, it is quite different. During the five heats I watched, the camel in the lead at the start was never the winning camel, which suggested to me that either these animals are not taught how to pace themselves throughout the race or the owners racing alongside with their transmitters don’t allow them to.

The camels practice daily with their handlers and are grouped by age. With the handlers’ limited English speaking abilities, I was unable to learn if there was such a thing as a purebred racing camel or not. I suspect not.

As the sport grew more competitive in the mid-1980s, trainers began using child jockeys, a practice banned worldwide in 2005.

With technology catching up with this “Sport of Sheikhs”, Qatar eventually also stopped using child jockeys and switched to robots. The titanium robot jockeys are designed to look like humans equipped with electronic whips and were first controlled by an armchair jockey manning a joystick and computer screen. Now, men drive alongside the track using remote-controlled robot jockeys.

Today, all camels race with robot jockeys strapped to their back. Ahmed Suleiman, a Sudanese camel handler from Darfur, showed me the robot jockey and explained how it worked. Each “jockey” is attached to a small metal frame fastened to the camel’s back. It contains two transmitters; one a walky-talky enabling the owner to “give vocal encouragement” to the camel from his vehicle, and a second transmitter that activates the robot. The tiny robot has a swirling arm that when activated, taps the backside of the camel similar to a human jockey using a switch on his racing horse.

According to online research, camels average 25 mph when racing, and top speed is 40-45 mph. Judging from what I saw, however, I’d have to guess that the camels were running at around 20 mph at top speed. The pace slows considerably as the race progresses.  As the camels crossed the finish line they visually slowed dramatically, many at an almost leisurely pace, while gobs of white foam hung from their mouths. A camel usually averages about 2 to 3 miles per hour when walking, 9 or 10 mph when trotting, and 16 mph during a gentle jog. 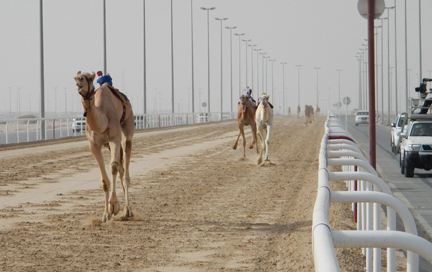 As they rounded the corner they were led into a holding area where urine bags were fastened on them. Soon thereafter, the bags were removed, and the camels were led into a very large area where the handlers quickly placed blankets over them while loosely tethering them to the fence where they stood for at least 30 minutes cooling down.

A prominent Bedouin sport has always been the informal camel race dating back hundreds of years. Many GCC countries implemented racing as an effort to preserve Arab culture and tradition. With serious money to be won, racing is more popular than ever. Kuwait, Qatar, Oman and the UAE are popular racing venues.

Qatar featured its first camel race in 1972, while the first race at Al Sheehaniya racetrack – where I was – began in 1990. Today, the racetrack has three concentric tracks: five-, six-, eight- and 10- kilometer distances. Camel races, which typically run during the winter season months of October through late April or early May, are free. In Qatar during the racing season, races are daily – early in the morning and again beginning at 1:30 in the afternoon. Since betting/wagering is haram (forbidden) in Islam, this is strictly an entertainment sport. There are some prestigious races, such as the Emir Cup, where the owners of the winning animals win trophies and monetary prizes. 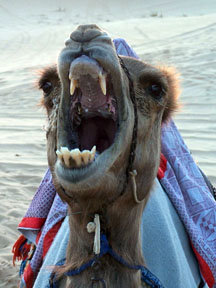 Camels are an interesting beast. They stand between 1.8 and 2 meters (6 to 6 ½ feet) tall at the shoulders and can weigh from 250 to 680 kilograms (550 to 1500 pounds). Long, curly eyelashes keep out sand and protect their large eyes. Glands supply the eyes with water to stay moist while thick eyebrows shield the eyes from the intense sun.

Powerful leg muscles allow for carrying heavy loads long distances. Camels usually walk, especially if it is hot, but when they must travel faster, they can gallop or pace at a medium speed. The pacing and rocking motion can make riders “seasick”; thus, the associated term “ships of the desert”.

Across the road from the track is a virtual “camel city” where hundreds of men and camels live year round. Their numbers swell considerably prior to a big racing event when owners, trainers and camels from other Arab states move in for a few weeks.

Amid this patchwork of compounds, colorful strings of camel trains, the animals bunched tightly together, sauntered across the road – their riders dressed in the timeless fashion of their ancestors, the camels covered with brightly patterned blankets and crocheted nosebags – to run their daily practice paces. An incredibly friendly lot, handlers waved and shouted ‘hi’, just one of a handful of English words that they knew.

Prior to the day’s races, my husband and I, along with another American couple, crossed the road from the stadium and set about exploring the expansive “camel city”. Peaking around crumbling walls of mortar and wandering past traditional black Bedouin tents and vanilla colored mosques, a group of Sudanese handlers spotted us, and motioned us into their sparse courtyard.

The camels hungrily munched on yellow grains and leafy greens, which resembled baby spinach leaves, paying us no attention except for when we poked a camera into their faces. They were docile and willingly posed for photos. Six of the Sudanese gathered around, one or two hanging back while brushing their teeth and washing up, as we all attempted to communicate with gestures and one- or two-word phrases. Smiles successfully broke the communication barrier every time.

Experiencing local culture is an exceptional way to add depth and meaning to a foreigner’s adventure, and camel racing is one such experience ranking right up there near the top.