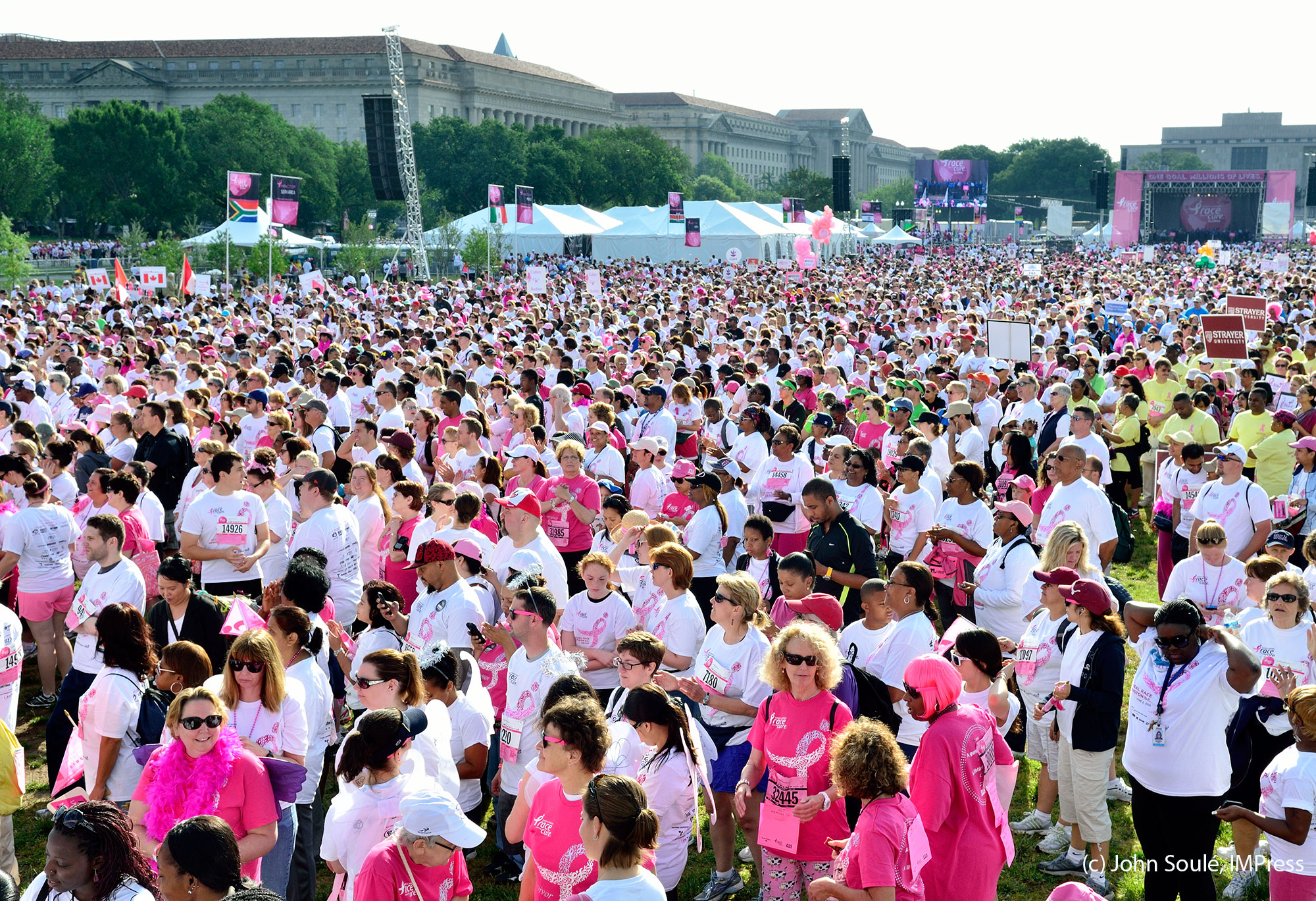 [dropcap]T[/dropcap]his June over 27,000 participants gathered at the National Mall near the Washington Monument for the 23rd Susan G. Komen Global Race for the Cure.   The event, held annually in Washington, DC, raises funds for community health outreach programs in the Washington Metro Area, while also funding research and global breast health programs. 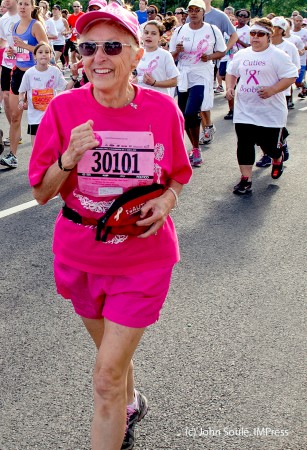 Komen is now the largest non-profit fund raiser for breast cancer reserach outside of the federal government, contributing more than $740 million in the past 30 years and funding more than 500 grants globally. 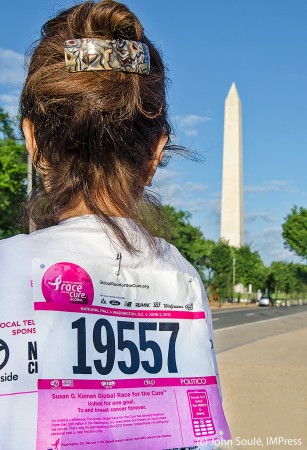 It was a clear morning for this year’s Global Race for the Cure.  The annual event had drawn tens of thousands of people to the National Mall for the 5k walk/run around historic monuments.  Participants gathered at the foot of the Washington Monument on the National Mall as the ceremony kicked off at 7:40am with Sarah Charness playing the National Anthem.  Ambassador Gary Doer from the Embassy of Canada gave a few words and then came the parade of survivors – one by one filling the grandstands.  Colby Dee performed a specially written song, followed by a few words from survivor Bridget Spence, actress Gabrielle Union and founder Nancy Brinker.

The race started at the foot of the Washington Monument, continued past the White House and Vietnam Memorial, past National Museums and ended at the foot of the Capital where vendor tents welcomed visitors, bands performed and a survivor costume contest was to be held.  It was quite a full and emotional day. 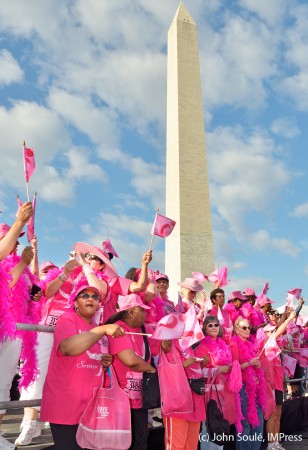 After the opening remarks, names of special individual survivors were called and a parade of pink began to fill the grandstands surrounding the Main Stage. To qualify as a survivor means to have beaten cancer for at least five years.  The survivors’ shirts were clearly labeled ‘survivor’ and many took additional steps to color their hair or wear pink hats to add to their appearance.

More than 100,000 survivors and activists have made this the world’s largest and most progressive grassroots network in the fight of breast cancer.

The rising country star Colby Dee performed her inspirational single,  I Will Fight On –  a song specially written for her longtime and close friend, Joni Moore Kanazawa, who is currently battling breast cancer.  This was a very personal moment for Colby as she sang on Main Stage.   Colby stated that she was really nervous singing this song to her 34 year-old friend who was hearing it for the first time live.  Colby said she could not look at her friend who had been diagnosed this past October out of fear of breaking down in tears.

“It is incredible to be part of this year’s Susan G. Komen Race for the Cure”, stated Colby.  “Not only is it exciting to perform in Washington DC, but this fantastic event is a rewarding opportunity for everyone involved to give back and have fun.”

Bridget Spence came to Main Stage with her moving story as how, two weeks after her college graduation from Boston University at 21, she was diagnosed with Stage IV breast cancer.  She explained how she had no family history of breast cancer and that now her whole life and future plans had to change as she would be spending much of her time in the hospital for 4 – 10 hours, three days a week.  That was in 2005.

She explained that since her diaganois, the Susan G. Komen organization had helped her every step of the way and wanted to give a special thank you to everyone for giving her more time with her husband.  Bridget calls herself “… a little girl on a scary journey wearing a pair of Big Girl Pants.”  A very emotional moment.

Taking the stage next was 39-year-old actress Gabrielle Union who has been vocal in lending her talents to the cause.  After her remarks she put on her running shoes and took part in the race to help raise money in honor of a friend who lost her battle with breast cancer.

Gabrielle said that it was a “…beautiful morning in DC… [and was] … so proud to be a part of the Global Race and an Ambassador … in memory of … Kristen Martinez.”

She is also an ambassador for  a skin health campaign which seeks to raise sun protection awareness and reduce skin cancer diagnoses.

After a moment of silence, the founder of the Susan G. Komen Race for the Cure, Nancy Brinker took stage as thousands cheered. Nancy had started the foundation nearly thirty years ago in Dallas, Texas for what is now recognized as the world’s largest and most successfully series of 5k run/walk events designed to raise public awareness of breast cancaer.

She has grown involvement from what started with 800 participants to over 1.6 million participants in more that 150 locations globally.  In total, 18 international races are to be held worldwide this year.  Nancy was awarded the Presidential Medal of Freedom by President Barack Obama in 2009. 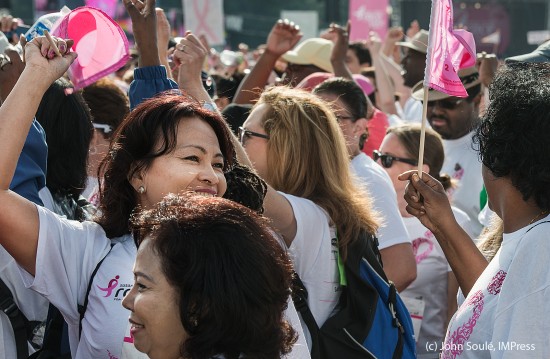 As participants headed to the Starting Line, they were greeted by the uplifting voices of the Howard University Gospel Choir.  Many standing in line waiting for the start of the race sang, clapped and danced.  The choir was formed in 1968 and was the first college choir of its kind in the world.  A truly uplifting moment for the participants.

There were three types of participants in attendance: survivors, family/friends of someone touched by breast cancer and there were supporters.  Survivors could be identified by their pure pink attire – from shirts to hats with the words ‘Survivor’ proudly displayed.  Supporters who were registered runners/walkers wore ‘Race for the Cure’ T-shrits.  Some groups came with ‘team’ shirts that were made with their organization or loved one’s name.  Supporters carried flags, banners and hand-made signs.  There were men and women of all ages, babies in carriages, Kids for the Cure, and of course pets of all kinds.

There were also many corporations, some large and some small, that came to provide their support.  I spoke with Doug Greise and Dave Svec, founders of Veris Group, a leading Virginia-based IT corporation, and learned that “Veris Group [was founded] with a conscious commitment to giving back to the community, a mission that we have fulfilled with our employees’ support though our work with various causes, charities and organizations.  Our involvement to raise awareness and funding opportunities for Breast Cancer began four years ago, and our team’s many personal connections to the cause continues to motivate and inspires our employees to participate in the event.”

There were some very large organizations, such as Adventist HealthCare, Doctors Community Hospital, George Washington University, Holy Cross Hospital, BankAmerica and the list goes on and on.

And there were individuals and families that came to show their support as they had been touched by the loss of loved one.  Christina Scarlato and sister Maria have been attending the race for several years in honor of their mother who they lost to breast cancer in 2001.  Christina also brought ‘Luna’, her border collie dressed out in pink too-too for the walk. 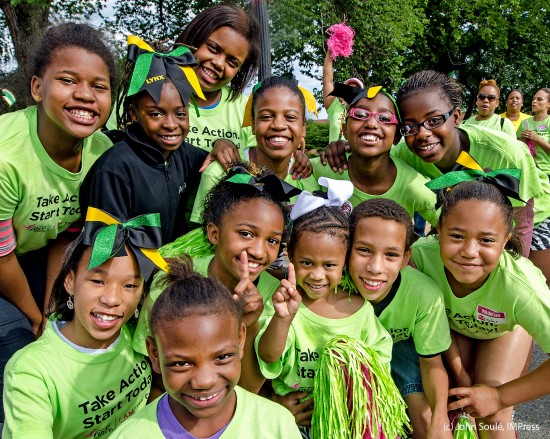 With any event such as this, you need volunteers to help keep things running smoothly.  From handing out water to giving directions to just cheering on the participants – volunteers were everywhere and were of all ages.  I found that this to be a very well organized event for the amazing amount of people that had attended.

This year has been a turbulent year for the Komen organization as the result of the decision to eliminate most of its financing for breast cancer education and screening to Planned Parenthood which runs women’s health clinics that also provide birth control and perform abortions. CEO Nancy Brinker had stated that she had decided not to finance grant applications for organizations that were under government investigation.  The protests on this decision caused a nearly 50% reduction in participants this year. 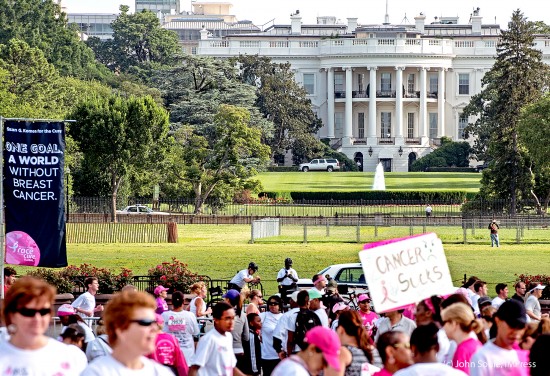 In addition to bringing awareness and fund raising to the Nation’s Capital, Washington DC has one of the highest breast cancer mortality rates in the United States, a statistic Komen is working to change with $11 million in community health grants specifically for low-income, minority and uninsured women in the region.  Seventy-five percent of the funds raised at this Race remain in the Washington DC area for programs providing treatment, screening and financial and social support to women and families facing breast cancer. 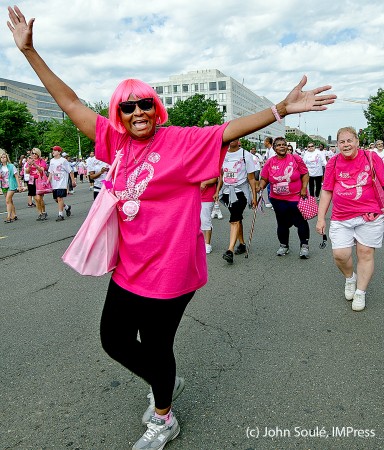 With the help of Susan G. Komen, in the past 30 years the breast cancer movement has made tremendous strides against the disease.  The breast cancer mortality rates are down by 33 percent since 1990 and the five-year survival rates are at 99 percent for early-stage breast cancers.  Nancy Brinker is keeping her promise to her sister.

For more information see the Susan G. Komen ‘For the Cure’ website.