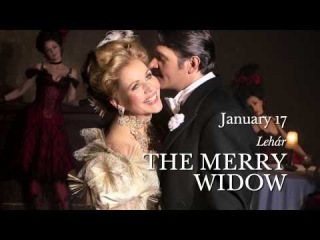 [dropcap]T[/dropcap]his season’s production of Franz Lehár’s The Merry Widow (Die Lustige Witwe) at the Metropolitan Opera is alight with brilliant colors, joyful dance, flirtatious sensuality and playful humor. The authenticity and opulence of the early 20th century Parisian stage sets and costumes immediately transport the audience to the vivacious, extravagant societal lifestyle of Paris during this dynamic, artful era, and to a fictitious Balkan country, Pontevedro. Always mannerly with delightful brushstrokes of effervescent humor, the dialog of this comic light opera vascilates between extremes of modernized preciosity (remember Molière?) and clever, flippant wit. The lilting, charming libretto by Viktor Léon and Leo Stein was based on the play, L’Attaché d’Ambassade written by Henri Meilhac and first performed at Vienna’s Theater an der Wien in 1905, in German. The English version of the libretto is by Jeremy Sams.

Act I takes place in the Pontevedrian Embassy in Paris at a party hosted by Baron Zeta, the Pontevedrian Ambassador. During this event, Camille expresses his passionate feelings for Valencienne, who is Zeta’s dedicated spouse. Meanwhile, Zeta encourages Danilo to wed Hanna, who is wealthy and recently widowed, for the purpose of keeping her wealth within the boundaries of Pontevedro. Hanna then invites the guests to a party at her home. Toward the end of the evening, Hanna and Danilo engage in polite conversation and dance together.

In this act, Hanna’s aria, Gentlemen, how kind, reflects both her acceptance of flattery and her awareness of male opportunism. In Danilo’s aria, Oh, Fatherland, he steps outside his party-boy image for a few moments to serenade the responsibilities he assumes for Pontevedro as a nobleman of minor status.

Act II begins with Hanna entertaining her party guests in excessive Parisian-Pontevedrian fashion. At this point, Danilo makes his entrance. An earlier love interest of Hanna’s, he now pays her little attention. Danilo’s family would not accept her before her marriage to a well-to-do banker. Now, as the banker’s widow, she is a woman of wealth. Since Danilo is exhibiting no interest in Hanna, Valencienne is urging Camille to make Hanna his wife for the sake of ensuring that the sum of Hanna’s net worth remains within the country. In the garden’s pavilion, Camille coaxes a kiss from Valencienne. Zeta becomes suspicious and jealous, although Hanna has covered up this brief romantic scene for Valencienne. Hanna then announces that she and Camille are engaged to be married. Unable to control his feelings of jealousy, Danilo angrily leaves for Maxim’s to take solace in the lively atmosphere and flirtatious CanCan dancers. Hanna now realizes that Danilo does love her.

Act III opens amidst the dazzling, mesmerizing color, spirited dance and flamboyant style of Maxim’s where Valencienne, Olga (Wallis Giunta) and Sylviane (Emalie Savoy) have gone with the intent of convincing Danilo to make Hanna his wife. The three ladies offer the Maitre d’hotel a bribe to clear the entire establishment. Hanna then confesses she is not planning to marry Camille, and the delighted Danilo proclaims his love for Hanna. The couple then dance to the romantic, well-known waltz (The Merry Widow Waltz) and everyone drinks a toast to love.

During this act, Hanna sings the traditional and expressive Hungarian song of the wood-sprite, Vilja. Camille sings the romantic aria, Just as the rosebud blossoms in the light of May, to Valencienne, and Danilo gives an emotional delivery to his aria, Fall in love often, as he makes his blustery exit on his way to party-life and the Folies Bergère at Maxim’s.

Along with the lilting, lingering strains of The Merry Widow Waltz, this act has the unforgettable duet sung by Hanna and Danilo, Strings are sighing. This opera includes a variety of dance forms throughout, including a rhythmic Polish folk dance (mazurka) sung by Hanna, sweeping waltzes and the high-spirited steps, kicks, pivots and stylish gyrations of the Folies Bergère and the CanCan. Each scene is further accented and enlivened by the creative expertise of this production’s set designer, Julian Crouch; costume designer, William Ivey Long; lighting designer, Paule Constable; and sound designer, Mark Grey.

Renée Fleming.  As The Merry Widow, Hanna Glawari, principal soprano and leading character Renée Fleming vocally and dramatically portrays the charming society widow with an exquisitely balanced combination of sparkling lyrical coloration, vivid emotional clarity and calm, sophisticated detachment. As she at once subtly reveals her true appreciation of male flattery and acute awareness of its opportunistic side, Ms. Fleming displays her finely developed acting skills and perceptions. She brings the most comprehensive, definitive range of melodic joy, overt fashionability, subtle characterization and pure vocal brilliance to the role of the widow Hanna that Franz Lehár could have hoped for in this acclaimed operetta.

Nathan Gunn.  In the role of Count Danilo Danilovitch, baritone Nathan Gunn very artfully, nimbly and fluidly makes his transition from hedonistic playboy to ardent pursuant of Hanna with honest intents of love and marriage. Danilo’s character transformation is emotionally convincing, ardently romantic and outstanding as revealed by this fine baritone. Mr. Gunn’s vocal power, range, agility and full tonal precision and control lend volumetric dimension and validity to his highly appealing portrayal of the count, both vocally and dramatically.

Kelli O’Hara.  As Valencienne, soprano Kelli O’Hara, finely accomplished actress and leading soprano, makes her Metropolitan Opera debut. The extensive versatility and range of both her dramatic and vocal abilities and experience are very evident in all aspects of her stage portrayal of Valencienne, Baron Mirko Zeta’s wife, and in her duets with Camille de Rosillion. When singing together, Valencienne and Camille are extremely convincing in their emotional color, intent and transparency.

Sir Thomas Allen.  In the part of Baron Mirko Zeta, baritone Sir Thomas Allen is the epitome of a proper, gentlemanly Pontevedrian baron who is determined to arrange a remarriage of Hanna Glawari to a citizen of his country, thus safely securing her fortune within its boundaries. At the same time, he ardently demands his wife’s unfaltering faithfulness. Sir Thomas’ resounding, expressive baritone delivery very effectively merges enthusiastic patriotism and anguish at any hints of marital derision or division.

Alek Shrader.  As nobleman Camille de Rosillion, tenor Alek Shrader is delightfully entertaining and believable as the playful, flirtatious suitor of the baron’s wife, Valencienne. In his duets with Valencienne as the object of his affections, and especially when he serenades her in his own arias, Mr. Shrader displays his finely tuned abilities of tonal modulation and skillful use of legato. When singing duets, Camille and Valencienne bring heights of emotional hue and spark to this production.

Franz Lehár (1870-1948) was the most outstanding composer of operettas during the revival of this delightful genre at the beginning of the 20th century in Vienna. His most famous operetta, The Merry Widow, became a lasting international success. This work has been well-recognized for its originality, melodic inventiveness, romantic motif, pronounced humor and wit. Lehár considered a career as a violin soloist while a student at the Prague Conservatory near the end of the 1890s. However, Dvorák persuaded him to decide on composition as his major focus instead, for which millions of music enthusiasts have been very thankful ever since.