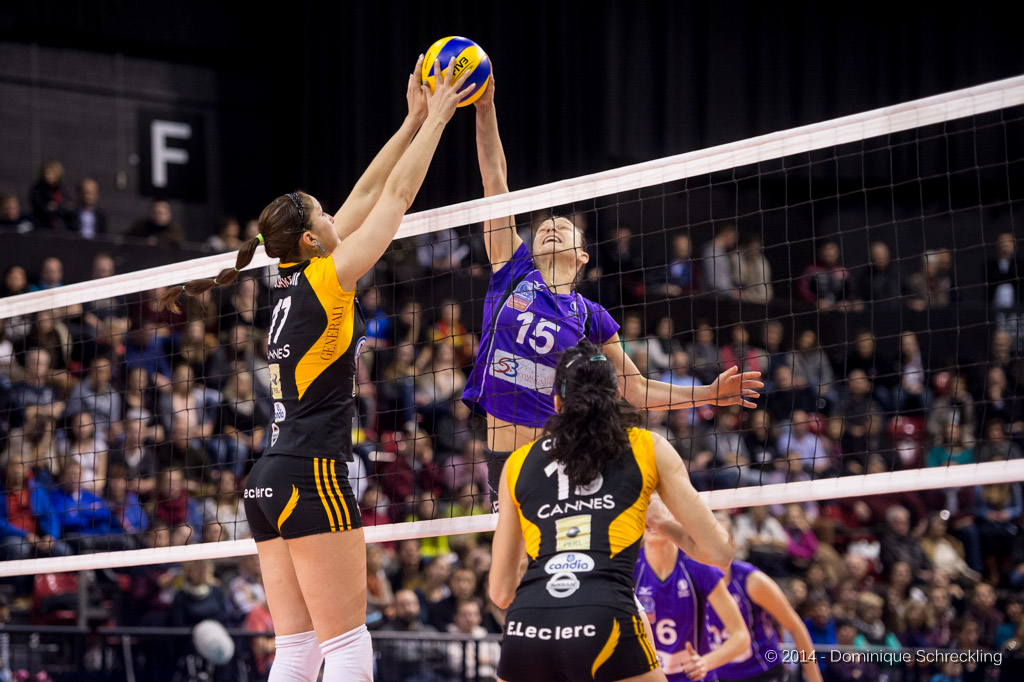 [dropcap]I[/dropcap]n the last week of the year, Basel holds a prestigious three-day volleyball event, the Top Volley International. This invitational tournament attempts to get the best women’s’ clubs from around the world into the city. It allows the public to watch women’s volleyball on the highest level and … the entrance is free! In the last week of 2013, this Top Volley celebrated its 25th edition.

As for the local teams from Switzerland and the surrounding countries, the tournament featured the Swiss champion Volero Zürich, the German champion Schweriner SC as well as the Racing Club de Cannes from France who won this event already seven times in the past.

Competition to these local teams was Banana Boat/Praia Clube from Brazil, the 13th club from that country to participate in Top Volley since 1999. Ranked fifth in the Brazilian championship, they count three players from the Brazilian national team as well as Olympic winner Kimberly Glass from the US. From Russia there was Dinamo Krasnodar, the winner of last year’s CEV Challenge Cup.

As an outsider from these clubs was the Swiss national team, Team Suisse. Their participation was meant as preparation for the qualifications to the world championships starting on January 3rd 2014.


Already the preliminary rounds and semi-finals on the first two days showed tight competition. Quite often, the sets were won with a difference of less than five points. Needless to say, the games took longer than expected and offered the crowd inside the St-Jakobhalle, an arena in Münchenstein, near Basel, which meant quite some extra time to enjoy volleyball on this high level.

The third and last day was the day of the finals. In addition to the usual finals for the 1st and 3rd place, the tournament featured also a somewhat unusual 3rd game, the “final” for the 5th place.


A tight game was hoped for the fifth rank. The Swiss national team met the German champion from Schwerin.

In addition to the aggressive attacks of the compact German team with their most effective striker, Lousi Souza Ziegler (BRA), there were difficulties in passing the opponent’s block. Furthermore quite a few errors were made by the Swiss team. This first set was not an optimal start for the Swiss team.

The other two sets showed a more balanced game. The tricks of the German attackers were much better defended. However, the Swiss attacks remained too often hanging on the opponent’s block and the team was unable to remove the small errors in its own game.


For the game for 3rd place, Volero Zürich had to compete against the winner of last year, Racing Club de Cannes.

The start was promising for Volero with magnificent attacks from Kenya Carcares (CUB). Cannes had some trouble getting into the game. Their block was especially not as desired. But as time passed, Cannes found back into the game mainly thanks to Corina Ssuscke-Voigt (GER) und Nadia Centoni (ITA). Both teams presented a fabulous game in the full hall at the highest level of volleyball.

After four long tight sets, the public expected a head to head tie between the two teams. The anticipation was suddenly disappointed. Within a few minutes, nothing seemed to succeed for the Volero side. Point by point was lost. Neither the attacks nor the defensive of Zürich succeeded. Cannes finally won the 3rd rank in this year’s edition of the Top Volley.


The expectations for the finals were high, South America vs Eastern Europe, Brazil vs Russia. Two teams representing their respective highest leagues.

The start was promising for Banana Boat Praia Clube and they took the lead with two sensational attacks of the Kimberly Glass (USA). Dinamo Krasnodar seemed apparently surprised by the strength of their opponents and seemed helpless to break the Brazilian defense. The Russian team made special efforts to find their way back into the game. Soon, the powerful attacks and precision feints of Rosir Calderon Diaz (RUS) put the opponents in situations that they could not manage. The game became more attractive with each ball and the audience of over 5’500 people was offered exciting world-class volleyball. Banana Boat still managed to win a single set, but the game and the victory of this year’s Top Volley went to Dinamo Krasnodar.