[dropcap]Y[/dropcap]oung girls in colorful traditional dresses paid no attention to onlookers as they kept pace jumping rope two at a time. Meanwhile, boys in white traditional thobes, engrossed in a lively game of tag, were darting about the Bedouin “village” while others concentrated on a skillful game of marbles. These three childhood activities were popular with Bedouin children decades ago, just as they were with most American children growing up in the 1940s and 50s.

The recreated traditional souq (marketplace) and village rooms and tents are a peek into the rich, distant past of an Arab Bedouin society. Young men demonstrated their pottery skills and artistic talents, while women busily labored over handicrafts of basket weaving and textile creations on various sized looms. All were for sale. Homemade honey and other delicacies were offered, along with a wide variety of oil-based perfumes and incense.

A lone falcon perched rigidly and obediently in a tent ensconced in the traditional hood seemingly oblivious to the public, although I’m sure it was not, next to a brownish/black tent exhibiting various homemade horse equipment, such as saddles.

Traditional performances from various groups were scheduled intermittently as entertainment, although I missed them on the evening I visited. I did catch a glimpse of the large public tent though where traditional Arabic coffee was being served.

But perhaps the main draw to this first-ever Halal Festival, showcased at Katara Cultural Village in Doha, Qatar, was the sheep and goat contests and public auction. Animal trade and breeding has been in existence back to the days of Islamic prophets. It too is a significant traditional industry of Bedouin Arabs.

Halal is a term referring to how an animal is slaughtered, and the means in which its food is prepared. Muslims only eat meat that is halal.

“This festival honors Arab culture and traditions, which we are truly proud of, allowing us to reflect on our past to ensure a stronger future,” Abdulrahman Al Khulaifi, president of Katara, said in a prepared statement. “This event also gives us the opportunity to promote our cultural heritage whilst sharing our legacy with the younger Qatari generation, reminding them of the importance of history.” 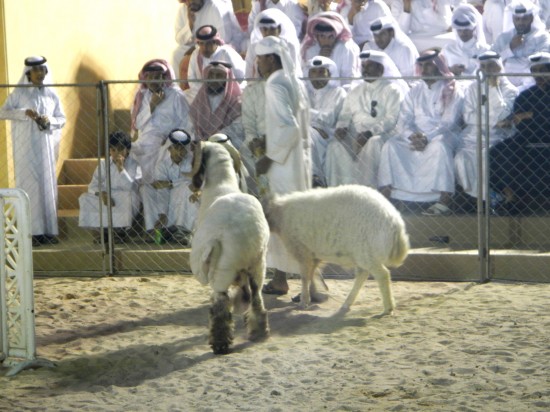 Seeking to revive interest and educate today’s young men as to the important legacy of sheep (goats and sheep) breeding, the festival is providing a unique insight into this industry. Around 400 sheep and goats of different varieties are temporarily taking up residence in 30 pens, while shepherds are on hand explaining to the public about the various types of animals, a history of the declining shepherd, and its importance in Qatari culture and heritage. A veterinarian was also on hand to discuss overall health, wellness and diseases these animals might be exposed to and/or susceptible to.

Nearby, men of varying ages, interests and occupations have come together to enjoy the nightly sheep and goat contests. During the festival’s run, the “most beautiful sheep” will compete in categories for cash prizes. Judges know exactly what to look for as they rate the “contestants” in areas including ‘best virile’, ‘best ewe’, ‘best breeding’, and ‘best goat’. Hamad Al Mannai, head of the Organizing Committee for the Halal Festival, explained that the contest consisted of nine levels and three categories in which competing sheep and goats would be chosen based on specific criteria determined by the panel of judges. A group of animals are also auctioned off to the highest bidder among the general public.

As I toured the stabled pens, I was amazed at the variety and appearance of the animals. I had only seen long floppy-eared rabbits, never sheep and goats sporting floor length bunny ears. And then there were some that even looked like the scraggly goat from the childhood fairy tale “Billy Goat’s Gruff”, while others were snowy white and appeared docile enough to reach out and cuddle. The females were protective of their young, just as any mother would be. Curled, short, stubby, and elaborate horns were another distinctive sight. Some animals were multi colored and patterned while others sported a solid hue. The festival excelled in showcasing the sheep and goat animal trade, as well as offering a rare insight into the industry.

[quote]“As Katara focuses on bridging cultures, it does not forget to look back on the country’s rich past and heritage with pride. And through this ten-day event, it revives an important part of Qatari tradition, which we wish to continue in the generations to come,” [/quote] said Mohammad Al Khulaifi, festival chairman.

As I was leaving the grounds, I encountered men arriving with monstrous platters of roasted goat for the public’s enjoyment. I almost made a U-turn and headed back as I conjured up images of the deliciously moist and tender meat I have enjoyed in the past. Ah, just one more reason to return to the Halal Festival in the days to come.