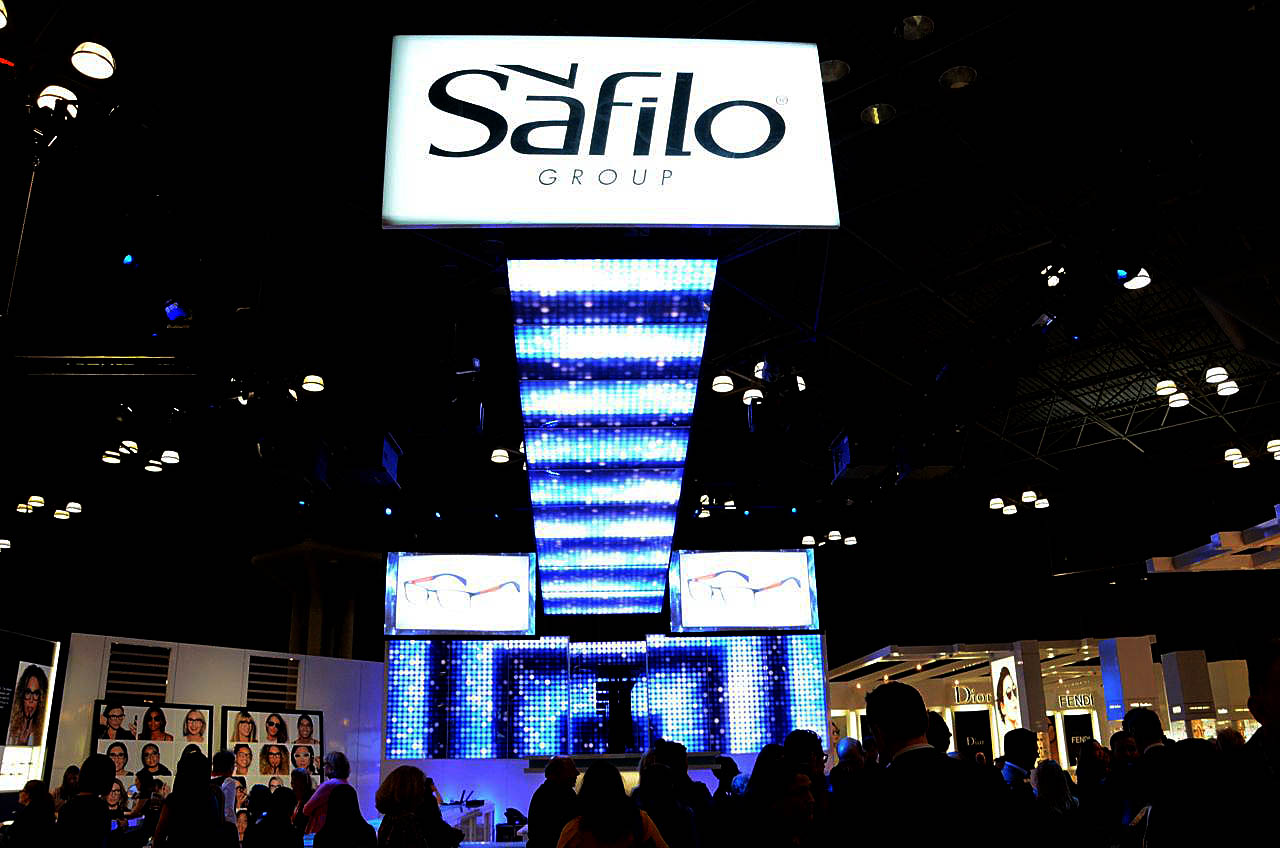 For years we have covered many of the trade and consumer shows in New York, but for some reason we seemed to have missed one of the largest and most exclusive shows of its kind. The International Vision Expo East is the most important global conferences in the world for the eight billion dollar eyewear and eye-care industry. It is second only to its sister show in Europe and the smaller show held in Las Vegas.  If you are in the vision industry it is the must show to attend.

The show ran from March 26th  to 30th  at the Jacob K. Javits Convention Center in New York.  The first two days of the show are devoted to education for opticians, optometrists and ophthalmologists and other eye care professionals.

On March 28th, the Expo opened its doors and over 28,000 professionals went to their appointments at 590 exhibitors to place their orders for some of this seasons hot new styles and products.   The show offers an opportunity for attendees to learn of industry updates and get an in-depth focus on clinical, technical and business topics related to their work.

Vision Expo offered an opportunity for vision industry professionals to meet and collaborate with other colleagues.  They could actually feel, touch and see an entire collection of frames and lenses and then place orders from these exhibiting companies. We saw many  product novelties, ranging from the most fashionable frames, including ones made of exotic woods and  14K gold to the most technologically advanced products for diagnostics and eye-care. We even saw eyewear that had magnetic and removable lenses, what a great idea.

Of course we were busy photographing the show itself, so we had little time to actually do our on camera interviews and learn a bit more about the products being shown at this show. Next year will be prepared and bring our crew with us.

As I met with a spoke to some of the experts I learned that there is a huge difference in the quality of the glasses we normally buy at our big box retailer.  I had noticed that the glasses I wear, never really offered me the sharp and clear vision I had hoped for and after hours on the computer, I would have eye strain and headaches. I found that even the $150 “frameless frames” I was wearing was in fact less expensive stainless steel not the titanium frames I thought I had purchased.

There is a huge difference in the Chinese frames and lenses and I spent time with Renee Wheelock the territory manager for the Nikon Lenswear company as she explained the differences.  She showed me a side by side comparison of what my lenses might see vs. the sight I would have with their Nikon lenses. I use a progressive lens so I can see near,  mid-range and distance with the one pair of glasses.  However, the lenses in my progressive lens glasses is not the same as the Nikon or other quality lenses. I have never put on a pair of new glasses that didn’t have to go back for a remake. I ended up settling for glasses that were never right and simply assumed this was the best I was going to get…until now.

After walking the floor of the show, seeing the enormous selection of glasses, speaking to the experts in this business, I promised myself that my vision was worth the additional cost. I even found a beautiful titanium frame at one of the vendors for only $30 that would have cost me a minimum of $150 at my box store.  I now have the knowledge I need to buy a quality pair of lenses for these frames. I can now take these frames to a retail location or even try one of the online vision dealers who offer an affordable option for the Nikon, Verilux or other progressive lenses I need.  I understand online is actually easier now because all that is needed is the prescription and they can produce the same glasses as a walk in location.  I will report on my success or failure in a follow-up article.

When you view our video you will see the floor of the show is sparse compared to the other consumer shows we cover.  You have to also remember that this show is attended by industry professionals only and the exhibits are not shoulder to shoulder and crammed into only a portion of the Javits Center.  This show was impressive and was filled with eye care professionals and buyers waiting to sit down at the exhibitors desks to write their orders. You can see this in our video.

Many people don’t realize that the eyewear market has two Italian companies that control the bulk of this industries production and sales of eyewear.

Luxottica Group S.p.A. out of Milan and Safilo Group S.p.A based out of Padua, Italy.

In addition to manufacturing frames,  they also own more than 7,000 retail locations around the world which include:  LensCrafters, Pearle Vision, Sears Optical, Target Optical, Bright Eyes and others. So when you are shopping for glasses don’t be surprised if you are buying from one of their retail locations.[divider]

Safilo is the second largest company and is considered the world leader in the premium eyewear segment and creates eyewear. They have been making eyewear products for over 75 years. They design, manufacture and distribute high-quality prescription frames, sunglasses and sports eyewear under licensing agreements for leading luxury and premium brands. Some of these brand names include:  Alexander McQueen, Bobbi Brown, Bottega Veneta, Carrera, Céline, Dior, Fendi, Gucci, Hugo Boss, Jimmy Choo, Juicy Couture, Marc Jacobs, Tommy Hilfiger, Pierre Cardin, Saint Laurent and others.

This new booth was designed to create larger industry wide conversations about the Excellence of Product, The Power of Storytelling, and The Art of Retailing. Not only did they have private offices to work with buyers, but also a second level for VIP buyers and a full bar serving cappuccino, coffee and soft drinks. This show simply can’t compare to the many other shows we attend.  At their Bobbi Brown area you will see them offering anxious guest a free Bobbi Brown make-over, right on the floor of the show.[divider]

Most of us have heard about the Google Glass under development and now we have discovered that Google and Luxottica have formed a strategic partnership to work together across multiple efforts on the creation of innovative iconic wearable devices. Through this relationship, Luxottica and Google will match up high-tech developers with fashion designers and eyewear professionals.

The two Corporations will establish a team of experts devoted to working on the design, development, tooling and engineering of Glass products that straddle the line between high-fashion, lifestyle and innovative technology.  Imagine reading your email while looking through your designer Google glasses.
Can we expect new laws governing this new technology and its use in the while driving or walking on the street? 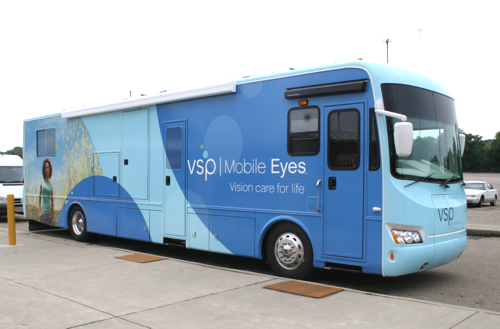 We met with Gilbert Melgoza the program manager for VSP Mobile Eyes®. This  program evolved from relief efforts following Hurricanes Katrina and Rita in 2005. They were on the scene to replace lost or damaged eyewear to affected individuals, as well as equip doctors to continue providing care.

They have deluxe clinics on wheels, outfitted with state-of-the-art exam rooms and dispensaries. Following the effects of Superstorm Sandy in November 2012, more than 6,000 residents throughout New York and New Jersey affected by the storm received a free eye exam, and if needed, glasses through relief efforts committed by VSP. See the impact in this informative video here. 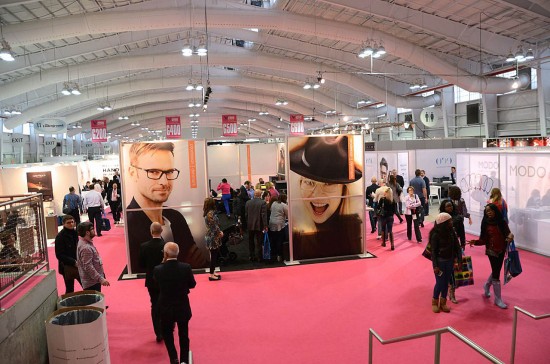 Now we were also impressed with the the North Hall at the Javits Center. This was dedicated to the many high end, designer and boutique lines.  You might think that they might not be as busy as the main hall, but you would be wrong.  It was wall to wall buyers waiting for their turn to sit at a table with one of the the company reps to place their orders.  We spoke to some of them and you will see some eye wear from these companies as well including frames made from exotic woods and 14K gold. You will also see an interview with WhiteOut & Glare.

Berlin based this company makes a beautiful frame that is designed by their own designers, using quality materials. They will explain the differences between their frames and the mass produced ones in our video.  I soon realized that this small piece of art called an eye glass frame is not about the small amount of material used in the making of the frame, but rather all the details and quality of the materials that go into a quality frame.  There is a difference and you can see it in our video.

As we entered the North Hall, we were truly amazed at the sheer number of buyers waiting for their turn to sit with a company rep so they could place their orders.  I would have thought that this hall would be sparse with visitors, but to my surprise it was as busy or busier then the main floor of the convention center.  As you will see in our video there were so many exquisite frames available some were industry famous designers and others were simply magnificent works of art.  We were truly impressed and didn’t have an opportunity to interview any of these companies because they were simply overwhelmed with buyers.

I usually have a good idea of what to expect when I cover an event, but this one took me by surprise. We were only told about the show a couple of weeks before it began and didn’t have a clue what to expect.  I can safely say that this was one of the most enjoyable and educational shows I have covered and one I will continue to cover in the future. The eyewear industry is a multibillion dollar business and their products are worn by a great majority of people around the world.  Proper eyewear is essential to most of us and our eyesight is precious. We need to be sure that the quality of our eyewear is not compromised by inferior and potentially damaging products being sold in the market today.  I can attest to the saying, you get what you pay for when it comes to eyewear.[divider]