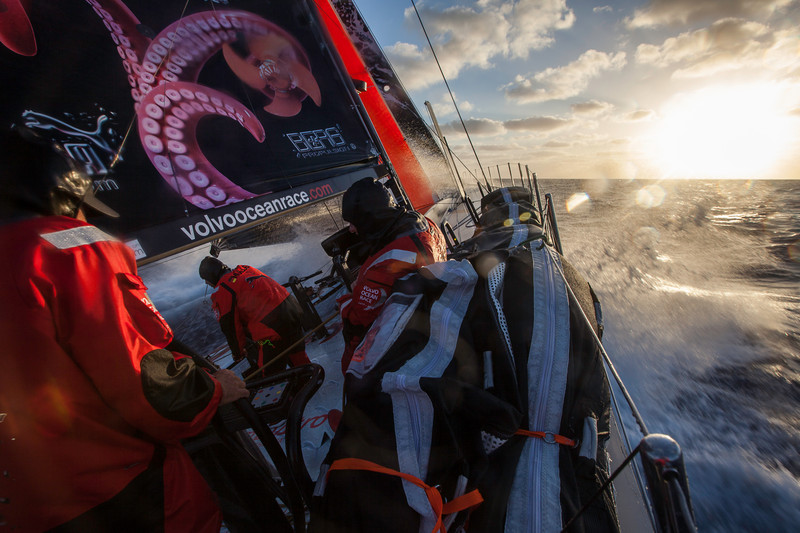 Overnight the deep Atlantic depression delivered all that it promised and more as the fleet achieved speeds of 30 knots, allowing leg leaders Telefónica (Iker Martínez/ESP) to achieve a 24-hour run of 540 nautical miles. Groupama, meanwhile, suffered a glitch which saw them lose 20 miles and two places as they battled to shorten sail in the worst of the storm.

As the gale howled around them, the crew of Groupama went to shorten sail only to find the mainsail halyard had jammed at the masthead. Bowman Brad Marsh made three trips to the top of the 31m mast as the wind built and the boat shook. In conditions where it was almost impossible to stand on deck, Marsh managed to free the sail after two hours and the mainsail fell to the deck before being rehoisted. The escapade cost the team 20 miles, allowing both PUMA Ocean Racing powered by BERG (Ken Read/USA) and CAMPER with Emirates Team New Zealand (Chris Nicholson/AUS) to take advantage. However, by 0100 GMT, Groupama were back up to their customary speed and had overhauled CAMPER. Still gaining at 0700 GMT, Groupama had snatched back second place from PUMA and had closed to within 6.20 nm of the Spaniards.

Meanwhile, as boat speeds increased as the storm took hold, distance to finish was clicking down rapidly. “The miles are clocking down at a fantastic rate,” reported Hamish Hooper, Media Crew Member with CAMPER. “In what seemed like minutes, 100 miles just disappeared.”

As the boats lurched and surfed their way towards Lorient in pitch darkness, the violent motion catapulted Hooper out of his bunk and forward into the navigation area. Fortunately, navigator Will Oxley and skipper Chris Nicholson were not occupying it at the time and no one was hurt.

With still a chance of winning the race overall, the crew of CAMPER have yet to throttle back. “It is that old question, when to pull back and when to keep pushing,” said skipper Chris Nicholson. “You just have to judge things at the moment and keep pushing hard. At the moment things are alright, so we keep blasting along, chasing down the leading boats just a handful of miles away.”

Telefónica achieved 540 nm in the 24-hour period leading up to the 0700 GMT position report this morning. They are the fastest in the fleet, but still some way off the 595.6-mile yardstick set by Ericsson 4 in the last edition. However, the wind continues to build and with just 580 nm to run to the finish, the 24-hour world record and the IWC Schaffhausen 24-hour Speed Record Challenge for the race could both be under threat.

At 0700 GMT today, Telefónica led Groupama by 6.20 nm, followed by PUMA on their port hip and CAMPER further to the west. With just 13.3 nm separating the first four boats, the pressure is intense. Abu Dhabi Ocean Racing (Ian Walker/GBR) and Sanya (Mike Sanderson/NZL) have not been able to achieve the relentless pace of the leading four and have slipped back to 35.7 nm and 60.7 nm respectively.

The big gybe onto starboard towards the finish is likely to be in about six hours’ time. Daylight will make this difficult manoeuvre easier, allowing the crews to judge the sea state and see the surfing waves. With 580 nm to go to the finish, it is likely that the fleet will arrive in Lorient in France on Friday during daylight.